Ukraine’s President Volodymyr Zelensky is pushing to privatize Soviet-era enterprises that represent “diamonds in the rough” for Western entrepreneurs with vision. After a 16-year lull, on October 27, the State Property Fund relaunched an effort to auction 3,000 state-owned properties, many located on valuable real estate. 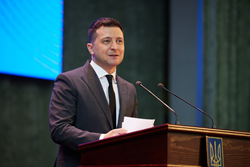 "Large scale privatization in Ukraine is one of the most anticipated events by business. It is ripe and ready to welcome Western investors," said Boris Kushniruk, Expert Council Chairman at Ukrainian Analytical Center.

"Ukraine's President Volodymyr Zelensky is on the move to privatize Soviet-era enterprises that represent diamonds in the rough for Western entrepreneurs with a vision," says Boris Kushniruk, Expert Council Chairman at the center.

Hoping to cash in on "location, location, location", many of the nearly 3,000 state-owned properties are situated in choice population centers, though they have been chronically unprofitable due to post-Soviet-era neglect.

About half are not currently operating; but, within those being auctioned are also efficient enterprises, such as titanium mines. The result is bargain basement prices and future opportunities for investors. Information about the program can be found at https://privatization.gov.ua.

As an example of opportunities foreseen by Zelensky’s team, experts point to the recent "Big Privatization" auction of the Kyiv Bilshovyk plant in midtown Kyiv.

That one auction attracted a consortium of local investors and brought 50 million Euros to State coffers.

"Large scale privatization in Ukraine is one of the most anticipated events by business. In our opinion, it is ripe and ready to welcome Western investors," said Boris Kushniruk, Expert Council Chairman at Ukrainian Analytical Center.

"Investors can acquire attractive assets that have significant promise," the official added. "The overall real estate market in Ukraine is booming, and such investment—due to the lack of effective exchange mechanisms—is a popular direction to invest."

Additionally, the State is willing under the "Big Privatization" program to sweeten the pot by helping to revitalize depressed industries.

"This is a significant incentive," added Kushniruk, "along with the prime land on which many of these enterprises are located. It makes for an attractive investment package."

The recently auctioned Bilshovyk plant, for example, is an outdated 19th-century defense engineering company located on 35 hectares (nearly 87 acres) of land in proximity to the center of the Ukrainian capital.

The new owners of the Bilshovyk plant are Ukrainian entrepreneurs Andrii Ivanov and Oleksii Baranov, who have successful development businesses in Ukraine.

Under privatization conditions, they will pay off accounts payable and fulfill the current collective agreement, preventing the dismissal of personnel. The development group is known for its job creation, multi-million dollar investments, and the first "Silicon Valley" in Ukraine.

Analyst Kushniruk is encouraged about Ukraine's ability to garner investment from the West.

"The country has all the components: an educated workforce, a strong industrial potential, the most fertile land in Europe, rich mineral resources, and access to the sea," he said. "It's all there for success."

Ivan Miklos, former Minister of Finance of Slovakia and Chairman of the Strategic Advisory Group for Support of Ukrainian Reforms, recently wrote that the successful experience of large-scale privatization would help the country reach its full potential.