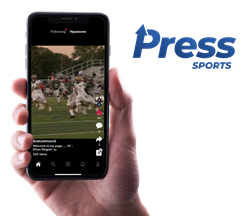 Press Sports, a sports social media app (iOS) that is transforming the way fans, athletes, coaches, and teams build their brands and engage with sports highlights, today announced the closing of its $750,000 pre-seed funding round.

Press Sports was founded in 2018 with the goal of becoming the leading global sports social network that brings athletes, fans, coaches and teams from all levels closer together. Press Sports offers unique features for the sports community like live-updating leaderboards and individualized Hypezone feeds that the community curates by “hyping up” videos. The app recently released the new Breakdown feature that allows fans and coaches to easily add their feedback or reaction to an athlete’s original post.

“Growing up playing just about every sport together, Drew and I never had a place to compile and share footage of our favorite moments as athletes,” said Conrad Cornell, CEO and co-founder of Press Sports App. “We created Press Sports for the over eight million high school and college athletes out there that are just like us—who don’t have a chance to showcase their career in a way that can be used to create opportunities and one day look back on. It was clear that the mainstream social media platforms would never cater to the specific needs of the sports community, so we started building a healthy alternative for modern day athletes and fans to interact in a sports-focused atmosphere.”

The funding round was led by Overline, an Atlanta-based seed-stage venture capital firm that primarily focuses on startups in the Southeast, and included Central Piedmont Investment Group and Sound Media Ventures, an Atlanta-based fund that focuses on high tech firms that power tomorrow’s media experiences.

Sean O’Brien, Managing Partner of Overline said, “We have tracked the growing popularity of vertical social networks that build community among people with shared interests and passions, enabling them to share highly relevant content and to make more meaningful connections around their common interests. We are thrilled to partner with the Press Sports team in its mission of creating the world’s leading sports-centric social network for athletes and fans.”

Drew Williams, Head of Growth and co-founder of Press Sports continued, “We’re proud to have built an engaged community that includes thousands of the country's most highly recruited athletes alongside their fans and friends. Press Sports gives players a platform where it is not only acceptable, but encouraged, to promote their personal achievements. As they build their fanbase on the app, student athletes will be well positioned for the NCAA NIL rule changes expected to take effect next Fall, which will allow college players to monetize their name, image and likeness directly through our app.”

“We have been working with the Press Sports team since early this year, and we continue to be impressed by their understanding of today’s sports markets,” said Michael Cohn, Managing Partner of Overline. “With the recent additions of both the technical co-founder and the CTO from YikYak, which previously generated social media success at scale, we see the Press Sports team as having all the ingredients needed to build a world-class company.”

About Press Sports App, Inc.
Press Sports​ ​is the leading sports social media app, with a community of athletes, coaches and fans from all sports around the world. The app was built by and for sports fanatics to provide a platform to find and share amazing sports highlights and to let people engage with their local sports community.

About Overline
Overline​ ​is a founder/operator-led early stage venture capital firm, based in Atlanta, that primarily focuses on investments in the Southeast United States. Its inaugural fund, Overline Seed Fund I, LP, is a generalist fund that leads pre-seed and seed investments across multiple industries and business models. Overline takes a hands-on approach to supporting its portfolio companies, providing key introductions to its network of prospective customers, partners, investors and top talent.