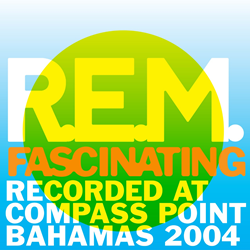 Single art for "Fascinating," a previously unreleased song recorded by R.E.M. in the Bahamas in 2004 and just released on Bandcamp to benefit Mercy Corps' hurricane relief efforts in the Bahamas

Fans can stream the song for free on Bandcamp and download it for a minimum donation of $2 or an amount of their choosing. Proceeds will go directly to Mercy Corps’ emergency response and recovery efforts in the Bahamas.

“Fascinating” first appeared on the original master of 2001’s Reveal before being cut last minute, and, in fact, was singer Michael Stipe’s favorite song from the Reveal sessions (according to guitarist Peter Buck’s recollection, as chronicled in David Buckley’s R.E.M. biography, Fiction). “It’s really beautiful,” bassist/keyboardist Mike Mills told Buckley. “It has a flute, oboe arrangement, but it made the record too long… and something had to go.” R.E.M. rerecorded the track in Nassau for 2004’s Around the Sun (co-produced by Pat McCarthy and R.E.M, and engineered by Jamie Candiloro), but the lush ballad ultimately didn’t jibe with that spare, atmospheric album. Now this poignant outtake finally finds its fitting moment, as a means to aid the country where R.E.M. enjoyed over two months of creative retreat.

“I have been fortunate to spend many weeks working and playing in the Bahamas, making friends and lots of music there,” reflects Mills. “It breaks my heart to see the damage wrought by Hurricane Dorian. Please help us and Mercy Corps do what we can to alleviate the suffering caused by this catastrophe.”

Hurricane Dorian hammered the Bahamas’ northwest islands of Grand Bahama and Abaco for 48 hours in early September 2019, causing widespread destruction and leaving 76,000 people homeless and in need of lifesaving assistance. Mercy Corps mobilized immediately and are committed to reaching 3,000 families with emergency kits including mosquito nets, tarps, jerrycans, water-purifying tablets and rope. Given the extensive electrical blackouts, the humanitarian aid organization is also distributing solar lanterns equipped with USB chargers so that survivors can charge essential devices and stay safe after dark.

“The Bahamas faces a long road to recovery after this devastating hurricane,” says Neal Keny-Guyer, CEO of Mercy Corps. “We’re grateful to have R.E.M. in our global community of humanitarians, sharing their song with the world to help the people of the Bahamas recover and build back even stronger.”

Mercy Corps is a leading global organization powered by the belief that a better world is possible. In disaster, in hardship, in more than 40 countries around the world, we partner to put bold solutions into action – helping people triumph over adversity and build stronger communities from within. Now, and for the future.

Rock and Roll Hall of Fame inductee and multi GRAMMY® Award-winning band R.E.M. is one of the most revered bands to emerge from the American underground. Singer Michael Stipe, guitarist Peter Buck, bassist Mike Mills and drummer Bill Berry helped originate college rock during the post-punk scene of the ’80s. The Athens, GA-based group toured relentlessly for the first decade of their career, refining their idiosyncratic blend of brash tunefulness, poetic lyrics, chiming guitars and evocative vocals.

By the early ’90s, R.E.M. had become one of the most popular and critically acclaimed bands in the world. With an extraordinary three-decade-long run of creative vitality, R.E.M. has established a powerful legacy as one of the most enduring and essential rock bands in popular music history.

The song "Fascinating” is written by Peter Buck, Mike Mills and Michael Stipe and is published by Temporary Music (SESAC) and administered by Universal Music Publishing. ℗ 2019 and © 2009 R.E.M. / Athens LLC under exclusive license to Craft Recordings.