“The Price of My Vote” Goes Live

New music video released by The Price of My Vote calls on Congress to put country over party. 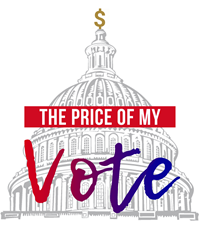 In 2018, Americans have a chance to elect members of Congress who will pledge to stand up for all and who will put nation over party.

Votes are never free: they come with a cost. A new music video dares to show that the cost has become far too steep. The Remorseful Republican is the second video produced by the same team that introduced America to Rap Battle: Uncle Sam vs. Trump.

Every time a member of Congress votes the party line over what is best for the country, the nation pays a price.

Every time a member of Congress votes the way a campaign contributor wants instead of doing what is right, the people pay a price.

Americans pays the price when members of Congress:

Americans pay the price when Congressional leaders do the bidding of an unhinged president.

Americans pay the price when a member of Congress — from either party — puts ideology and demagoguery above the nation’s best interests.

In 2018, Americans have a chance to elect members of Congress who will pledge to stand up and put the nation over party.

Each vote is priceless. Americans demand better from Congress, and that #thepriceofmyvote is top-of-mind as 2018 Congressional elections draw near. Contact your representative: http://www.house.gov/representatives/find/.

About The Price of My Vote
When members of Congress defer to ideology and narrow interests over the real needs of the nation, Americans must passionately and pointedly remind them who really pays the price for their misguided votes. The Price of My Vote seeks sanity over mindless partisanship, demands common sense in service of Americans’ common interests, and points a spotlight at spineless legislators taking this nation down a destructive path. Learn the price at: https://www.thepriceofmyvote.com.