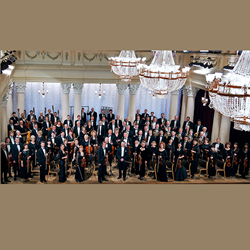 This is a golden opportunity to hear the leading symphonic organization of Ukraine, which is the most recorded orchestra located in any former Soviet territory.

Jack Price, founder of Price Rubin & Partners and concert pianist formerly known as Dickran Atamian, announces the U.S. tour of the distinguished National Symphony Orchestra of Ukraine. The Price Rubin artists will kick off their tour on Thursday, March 9, at 7:30 p.m. at the Armstrong Auditorium on the campus of Herbert W. Armstrong College, 14400 S. Bryant Road, Edmond, OK, as part of the Armstrong International Cultural Foundation Performing Arts Series.

“This is a golden opportunity to hear the leading symphonic organization of Ukraine, which is the most recorded orchestra located in any former Soviet territory,” said Price. “The National Symphony Orchestra of Ukraine will be performing the works of Dvorak and Prokofiev. They will appear with Kiev-born pianist Alexei Grynyuk, who won first prizes at the Vladimir Horowitz International Piano Competition in Kiev and the Shanghai International Piano Competition in China.”

The National Symphony Orchestra of Ukraine was also entrusted with the premier performances of the works by Shostakovich, Khachaturian and Lyatoshynsky. Since 1993, it has toured worldwide and has released more than 100 sound recordings on Naxos, Marco Polo and Brilliant Classics, receiving the highest international acclaim, including two Grammy nominations.

To purchase tickets for the National Symphony Orchestra of Ukraine performance at the Armstrong Auditorium on March 9, please visit http://www.armstrongauditorium.org/performance/national-symphony-orchestra-of-ukraine.