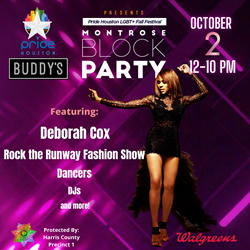 Hailed as the biggest LGBTQ event in Texas, the Pride Parade in Houston has been a landmark celebration since 1979. However, in light of the pandemic, the event sans parade, which usually takes place in June, has been scheduled as a block party in Montrose for October 9, 2021.

This year, headlining the Montrose Block Party is the Grammy-award nominated singer Deborah Cox, a multi-platinum R & B/Pop recording artist and actress who starred in the musical “The Bodyguard” as Rachel Marron, a role originally played by Whitney Houston.

Until 2015, The Pride Parade had taken place in Montrose, Houston's most gay-friendly neighborhood, and the parade route had been along Westheimer Road, from Dunlavy Street to Crocker Street. The streets were lined with people from all walks of life, celebrating the LGBTQ community and commemorating the raid of Stonewall Inn on Christopher Street in New York's Greenwich Village. Former Mayor and then City Councilwoman, Annise Parker, revised the Montrose Pride Parade ordinance to allow for a nighttime parade to help cool off the crowd.

This year Pride Houston has COVID controls in place to help the LGBTQ community gather safely. Attendees are encouraged to present a negative COVID-19 Test within 72 hours of the Montrose Block Party or wait in line for limited onsite testing at the event. Masks are also highly encouraged.

Pride Houston might have had to pivot during this pandemic but has found a way to bring back the old-school Pride jubilee. Thus, The Block Party at Buddy's was Born (this way). With the success of Houston's nonprofits, it’s no doubt the Houston’s LGBTQ scene has been on the rainbow radar lately. Lil Nas X, added several LGBTQ Houston nonprofits to the “baby registry” on his new album Montero, including the Organización Latina de Trans en Texas (OLTT).

Pride Houston needs the community to buy tickets in order to help support the nonprofit organization's scholarships for LGBTQIA+ Youth. For more information about the event and COVID-19 requirements, please visit https://pridehouston.org/event/montrose-block-party/

The Pride Houston Montrose Block Party will be held October 9, 2021, from 12:00 p.m. to 10:00 p.m. and folks can buy general admission and VIP tickets, along with vendor and sponsorship opportunities on the event page.