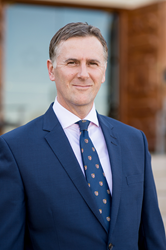 “Dr. Rob Havers brings an exceptional record of accomplishments in non-profit administration, military history, and library and museum services,” says Colonel (IL) Jennifer N. Pritzker, IL ARNG (Retired), founder and chairwoman of the Pritzker Military Museum and Library. “I am confident that the Pritzker Military Museum and Library will continue to grow and flourish under his strategic leadership.”

Havers is a military historian, an accomplished scholar, author, and public speaker. He comes to the Museum & Library from the George C. Marshall Foundation where he served as president for four years. From 2004 to 2014, Havers was the executive director of the National Churchill Museum, an organization dedicated to the remembrance and commemoration of Sir Winston Churchill. For three years prior, he was a senior lecturer at the Department of War Studies, Royal Military Academy in Sandhurst, United Kingdom.

“Chicago was named best big city in the USA by Conde Nast Traveler in 2018. The city’s rich culture, history and museums contribute to the appeal,” says Pritzker. “Bringing in an internationally known and respected leader in military history will help share the contributions and sacrifices of the citizen soldier with residents and visitors.”

"I am honored to continue the magnificent work of the Pritzker Military Museum and Library and to expand on future growth opportunities,” says Havers. “Chicago’s cultural institutions have helped shape this great city. I look forward to working with the committed and knowledgeable staff to further the work of this respected institution.”

Interim President and Chief Executive Officer John Schwan will officially step down but will continue to serve as a board member for the Museum & Library.

The Pritzker Military Museum & Library is open to the public and features an extensive collection of books, programs, artifacts, and rotating exhibits covering many eras and branches of the military. For more information about the Museum & Library located at 104 S. Michigan Ave, visit pritzkermilitary.org.

About TAWANI Enterprises
A visionary umbrella organization with an entrepreneurial outlook, TAWANI Enterprises seeks to make private investments that connect people to the history in their midst and create opportunities for growth and knowledge, while forging stronger, healthier communities. The company represents a diversified portfolio of brands, such as the Stone Heritage Collection, TAWANI’s hospitality arm of thoughtfully designed lodging and event spaces, the Pritzker Military Museum and Library, the TAWANI Foundation and the Pritzker Military Foundation. Properties under the Stone Heritage Collection include Stone Terrace, Stone Porch by the Lake, Lang House, The Emil Bach House, Mayne Stage and The Lincoln Way Inn. For more information, visit http://www.tawanienterprises.com.