Pritzker Military Museum & Library Marks Pride Month with a Panel Discussion on the Nation's Largest Employer of Transgender People, The Department of Defense

Registration Open for Free Virtual Event on June 23rd at Noon. "Exploring the Intersection of the U.S. Military and the LGBTQ Community" 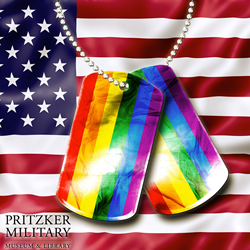 The Pritzker Military Museum & Library is proud to present a panel discussion, "Exploring the Intersection of the U.S. Military and the LGBTQ Community," on Wednesday, June 23rd at Noon CDT in celebration of Pride Month. The virtual event will feature military service people in the LGBTQ community who will share their experiences, and explain how policy changes have affected their service. Moderated by Mara Keisling, Founder and Executive Director of the National Center for Transgender Equality, the panel will feature U.S. Army Capt. El Cook; Nic Talbott, a plaintiff in four original legal cases challenging the transgender ban in court; and Melissa Margain, CDVS-II Army Combat Veteran.

"We are very pleased to bring together this panel of individuals, each with their own unique story, to speak at the Pritzker Military Museum & Library," stated Susan Rifkin, Chief Operating Officer of Philanthropic Activities. "The Museum & Library stands for sharing and preserving the stories of all who have served in the Armed Forces, and we are proud to share their perspectives."

In 1993 the "don't ask, don't tell" policy was enacted, which allowed only closeted LGBTQ people to serve in the military. It wasn't until 18 years later that Congress repealed this policy, finally allowing LGB people to serve openly in the military. In 2013, spousal and family benefits were extended to same-sex married partners, and in 2021, after a temporary ban, transgender individuals were again allowed to enlist and serve.

According to several recent studies and noted by the Human Rights Campaign, the U.S. Military is one of the largest employers of transgender people. These inclusive policies help create a strong and ready military, hiring the best people for the job based on readiness, fitness and qualifications, rather than age, gender, or sexual orientation as a qualifying basis.

Who: The Pritzker Military Museum & Library

What: "Exploring the Intersection of the U.S. Military and the LGBTQ Community,"

Where: Virtual Presentation via Zoom

Panelists: Mara Keisling - the Founder and Executive Director of the National Center for Transgender Equality. Since 2003, Mara has led organizational and coalition efforts that have won significant advances in transgender equality.

U.S. Army Capt. El Cook - completed one combat tour in Kuwait in 2015 and two additional tours in Iraq. His combat tour in 2015 occurred before his gender confirmation surgery. His story is featured in "TransMilitary," a documentary that premiered at South by Southwest (SXSW) 2018 and won the Best Feature Documentary Audience Award.

Nic Talbott - an advocate for the rights of transgender people to serve in the military. Nic's story and advocacy for LGBTQ rights have been featured across the media, including USA Today, NBC, and Men's Health.

Melissa Margain, CDVS-II Army Combat Veteran - entered the Army in 2005 as a dental specialist. She later deployed to Iraq as part of the 502nd Dental Company, 1st Medical Brigade, during Operation Iraqi Freedom and served two tours in Iraq. Today, she is the Seattle Program Director of the Minority Veterans of America branch in Seattle.

Info:    For more information and registration, visit the website http://bit.ly/PMMLPrideMonthPanel

About the Pritzker Military Museum & Library
The Pritzker Military Museum & Library aims to increase the public's understanding of military history, military affairs, and national security by providing a forum for the study and exploration of our military - past, present, and future - with a specific focus on their stories, sacrifices, and values. With national and global reach, these spaces and events aim to share the stories of those who served and their contributions as citizen soldiers, helping citizens everywhere appreciate the relationship between the armed forces and the civilians whose freedoms they protect. A non-governmental, non-partisan organization, the Museum & Library features diverse collections, scholarly initiatives, and public programs from its flagship center in downtown Chicago to its world-class research center and park currently under construction in Somers, Wisconsin.