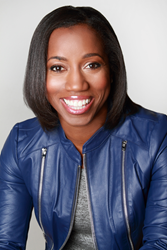 “This is a momentous occasion for women in professional sports and especially football."—Adrienne Smith

Adrienne Smith, creator of Blitz Champz, Boston Renegades Wide Receiver, football advocate and spokesperson, Orange is the New Black actress, and entrepreneur, has joined the American Flag Football League (AFFL) to head up the new Women’s Division. In this role, she will oversee football operations and corporate partnerships.

“This is a momentous occasion for women in professional sports and especially football,” Ms. Smith stated. “Flag football is one of the most exciting and accessible sports today. Leading the AFFL’s new Women’s Division—with an equal grand prize to the Men’s Division—represents greater gender diversity and equity in sports. This perfectly aligns with my company Gridiron Queendom’s mission in promoting women and girls in football.”

“We are excited to partner with the AFFL to highlight the immense pool of talent in women’s flag football," said Mashonda Gilmore, Founder & CEO of the Lynn Lewis Foundation. “It is time for women and girls to have equal footing. We are proud to be a part of this important movement.”

As part of Women’s History Month, Ms. Smith participated in a panel discussion hosted by The New England Patriots and New England Revolution featuring influential women in sports, discussing their careers and challenges they have overcome to become leaders in the sports industry. This lively panel discussion may be viewed on the Patriots’ website at https://www.patriots.com/video/patriots-and-revolution-host-women-in-sports-panel.

As a professional athlete, and having grown up playing team sports, Ms. Smith believes that sports foster an essential attitude of sportsmanship, teamwork and drive to succeed. In 2016, Ms. Smith created Blitz Champz, a football-themed card game for kids and families. The game has quickly become a part of family game nights, a tech-free activity for kids and families, and as a math-learning tool.

“I created Blitz Champz to share with kids and families the fast-paced joy and excitement of professional football while learning math in a painless and effective manner,” Ms. Smith said. “The game has become a learning tool for families, teachers and even school districts. My vision is for all kids around the world to have access to Blitz Champz, burnish their math skills, and have more offline fun with their friends, siblings and families.”

Ms. Smith started her football career in 2006 as a member of the New York Sharks, and went on to compete internationally, bringing home silver medals in Sweden and Canada as a member of the U.S. women’s national flag football team. In 2010 and 2013, Adrienne helped the U.S. women's national tackle football team bring home the gold medal in the International Federation of American Football’s Women’s World Championship.

Since 2011, Ms. Smith has played for the Boston Renegades, a tackle football team in the Women's Football Alliance and winner of national championships in 2011, 2014, 2018 and 2019. Ms. Smith’s professional career began in Japan, where she worked as a translator and Coordinator of International Relations for the Japanese Board of Education. During her two years in this position, Adrienne produced and co-hosted a local television show geared towards educating Japanese people about American culture. Ms. Smith earned her MBA from Columbia Business School in Media & Entertainment; and her Bachelor’s degree in Japanese and Film, with a pre-med concentration, from Washington University in St. Louis.