Veronica von Borstel was a finalist on Food Network’s Halloween Baking Championship and is a culinary veteran with over 22 years of kitchen experience. 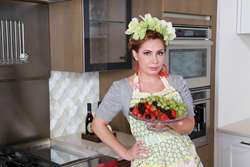 I am dedicated to creating engaging educational content that is fun, accessible, and informative.

Veronica von Borstel is best known for her time on Food Network’s Halloween Baking Championship; the cooking competition that crowns the country's best baker of eerie desserts. Her development deal will cover cooking formats, in and out of the kitchen. The San Diego native specializes in traditional heritage and vintage baking recipes with fun, modern twists.

"Veronica is extremely talented and the world was able to see that on the Halloween Baking Championship. I think of her baking talent as delicious artwork. She is going to be a breakout star when the cameras shine on her again. She is very charismatic and enjoys baking family favorites and trendy treats. We were only able to see a glimpse of her on the Halloween Baking Championship, but she has much more to share with viewers in the future." - E'Ian West, Founder of Montage Media Production Company.

Montage Media Production Company is a Los Angeles-based production company founded by E’Ian West, that partners with a dynamic mix of entertainment professionals. The seasoned team of production professionals utilize a globally diverse reach and ever evolving commitment to creative content. http://www.montagemediausa.com to learn more.

"I am thrilled to be working with E'Ian and his incredibly talented team. I am dedicated to creating engaging educational content that is fun, accessible, and informative. Keeping memories and food history alive is very important to me, and I feel incredibly blessed to have this opportunity to share my passion with new friends. So gather 'round and get ready for some quick wit, sassy jokes, and a whole lot of love coming out of this kitchen. All are welcome. Let's eat!"- Veronica von Borstel

Ms. von Borstel has worked in kitchens coast-to-coast. With encouragement from her mentor, the late, great Rock & Roll chef Kerry Simon, she began her culinary training in Los Angeles, and then moved to New Orleans to apprentice at Emeril Lagasse's Delmonico Restaurant. While working in various kitchens, she completed her degrees at San Diego State University. She holds an MBA in International Business with an emphasis in Latin American agricultural trade, and a BA in Art and Design. She has been seen on Food Network's Halloween Baking Championship, San Diego Gay & Lesbian News, NBC's The Feast, SDPix Magazine, KSON Radio, San Diego Living, Fox Morning News, and The San Diego Union Tribune.