Shahid for Change raised over $224,000 in its first two quarters, surpassing all progressive Pelosi challengers over the last three decades at this stage 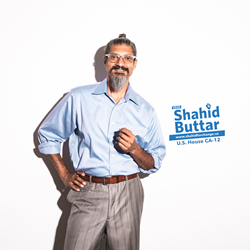 I feel deeply grateful for the support of thousands of my neighbors and fellow Americans from coast to coast, and I’m eager to do the job in Congress that Pelosi has been so reluctant to do.” said Buttar.

Shahid for Change, the campaign to elect Shahid Buttar, a Pakistani-American constitutional lawyer challenging House Speaker Nancy Pelosi for her seat in California’s 12th Congressional District, today announced it has raised over $224,000 through the FEC’s Q3 deadline since launching in April 2019. The haul suggests that Buttar is mounting a more robust challenge than any that Pelosi has ever confronted.

In the 3rd quarter alone, the campaign brought in more than $150,000. To date, the campaign has received over 8,400 donations from over 5,750 grassroots donors from across the country. 99% of all contributions came from small donors (those who gave $200 or less), and the most common profession of campaign donors is tech workers. The campaign’s average contribution is $22.61.

“As an immigrant, I’ve been proud to dedicate my life and career to defending our nation’s stated values—especially in the face of rising fascism. I feel deeply grateful for the support of thousands of my neighbors and fellow Americans from coast to coast, and I’m eager to do the job in Congress that Pelosi has been so reluctant to do,” said Buttar. “We built this campaign by demonstrating solidarity with labor, and social movements defending and advancing human rights, climate justice, and universal healthcare. We’re just getting started.”

The campaign’s record-breaking haul, and remarkable number of grassroots donors, reflect its growing strength among San Franciscans, the ascendant progressive movement, and working-class Americans all over the country.

“At a time when income inequality is growing exponentially in San Francisco and across the country, it is incredibly telling that struggling people prioritize making small-dollar contributions to our campaign,” said campaign manager Jasper Wilde. “The reason is clear: people know that our representatives are to blame for their daily suffering under late-capitalism. They are yearning for an alternative, and that’s why they are funding this campaign.”

Notably, Pelosi’s highest-profile progressive challenger to date, Cindy Sheehan, raised $119,570 in her first two quarters during the 2008 cycle. Even after adjusting for inflation, it sits well below Buttar’s $224,000 haul. In comparison, Rep. Alexandria Ocasio-Cortez brought in $38,958 during the first two quarters of her 2018 campaign.

A detailed description and outline of Shahid Buttar’s platform, as well as his background, can be found at shahidforchange.us/issues/.

About Shahid Buttar
Shahid Buttar has been building social movements and speaking truth to power for almost two decades. Since graduating from Stanford Law School in 2003, he has worked in both San Francisco and Washington as a constitutional lawyer, a non-profit leader, a grassroots organizer, a poet and musician. His passions have long aligned around a common purpose: building the movement to place human rights and human needs like peace and sustainability before corporate profits.

An early advocate for marriage equality for same-sex couples and a prolific organizer in the movement to end warrantless government surveillance, Shahid most recently built a national grassroots network for the Electronic Frontier Foundation as the organization’s Director of Grassroots Advocacy. He also challenged Nancy Pelosi for her seat in 2018, winning more progressive votes almost any other candidate in 10 years.

His writing has appeared in TechCrunch, Truthout, the Huffington Post, EFF’s Deeplinks blog, Project Censored, and various legal academic journals, and he has been quoted as an authority by outlets including the New York Times, CNN, the Nation, al-Jazeera, WIRED, the Washington Post, Mother Jones, Democracy Now!, the Intercept, and the Guardian US.