King of the Motos returns to Nitto King of the Hammers with new title sponsor Progressive Insurance. 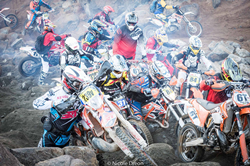 “Progressive Insurance has been protecting riders for more than 50 years and understands the passion of the motorsports community. They have always been innovators, just like our community of racers. We look forward to a successful relationship,” noted Dave Cole, King of the Hammers founder.

Progressive King of the Motos is the crowd favorite competition at the annual Nitto King of the Hammers week of racing in the Southern California desert. The 8-day event has become a pilgrimage for off-road racing and automotive enthusiasts globally and attracts over 50,000 people to the makeshift village known as Hammertown. Over 2.5 million people watch the live webcast.

The moto event will take place on the final day of Nitto King of the Hammers – Saturday, February 8, 2020. It is considered an extreme enduro and tests riders on some of the most iconic and difficult rock climbs and descents in North America. The race has garnered significant attention and is known for its spectacular land rush start up brutal rock faces.

In addition to King of the Motos, Progressive will have presence throughout the race year as title sponsor of the ULTRA4 Racing Series. The ten-race series that features ULTRA4 cars, stock and stock modified vehicles and UTVs, is divided into a three regional sub-series with the final National Championships slated for October 23rd in Reno, Nevada.

“Progressive Insurance has been protecting riders for more than 50 years and understands the passion of the motorsports community. They have always been innovators, just like our community of racers. We look forward to a successful relationship,” noted Dave Cole, King of the Hammers founder.

ULTRA4 Racing
ULTRA4 is a vehicle type, a class, a lifestyle, and an International racing organization. ULTRA4 Racing was born from the popularity of the annual Nitto King of the Hammers, the toughest one-day off-road race in the world. In just a little over a decade, the sport has grown from the single King of the Hammers race to a worldwide racing series, featuring over a dozen races in the US, Mexico, Europe, and New Zealand. The vehicles range from unlimited four-wheel drive creations to stock classes to UTV’s. ULTRA4 vehicles are capable of competing in multiple racing disciplines, from extreme rock crawling, to high-speed desert racing, to short course. ULTRA4 Racing is managed by Hammerking Productions located in Temecula, CA. To learn more and find the 2020 race series schedule, visit ultra4racing.com.

Nitto King of the Hammers
Nitto King of the Hammers (KOH) is the annual destination event for motorsports enthusiasts from across the globe. It takes place annually in Southern California in the Johnson Valley OHV area. The race began just over a decade ago with twelve people racing for bragging rights in ULTRA4 vehicles capable of tackling extreme rock climbs and descents, high-speed racing, and short-course. Today, KOH is a weeklong festival of racing that encompasses Ultra4 vehicles, UTVs, motorcycles, T1 desert trucks, and stock to stock-modified off-road vehicles. To learn more about King of the Hammers, visit http://www.ultra4racing.com.