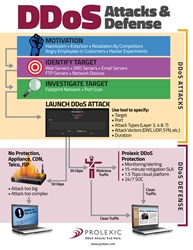 “While DDoS is a technical subject, it cannot be ignored by any organization that conducts business online,” said Stuart Scholly, president of Prolexic. “It’s important that businesses discuss DDoS and plan proactively. We hope this infographic will help start that conversation.”

The infographic shows the typical motivations behind DDoS attacks, how perpetrators select their target, identify weaknesses, and use tools to launch their attack. It also contrasts Prolexic’s approach to DDoS defense with those of Internet Service Providers (ISPs), telcos, and Content Delivery Networks (CDNs).

Prolexic's DDoS Attacks and Defense infographic can be viewed and downloaded at http://www.prolexic.com/attackdefense.

Prolexic is the world’s largest, most trusted Distributed Denial of Service (DDoS) mitigation provider. Able to absorb the largest and most complex attacks ever launched, Prolexic restores mission-critical Internet-facing infrastructures for global enterprises and government agencies within minutes. Ten of the world’s largest banks and the leading companies in e-Commerce, SaaS, payment processing, travel/hospitality, gaming, energy and other at-risk industries rely on Prolexic to protect their businesses. Founded in 2003 as the world’s first in-the-cloud DDoS mitigation platform, Prolexic is headquartered in Hollywood, Florida, and has scrubbing centers located in the Americas, Europe and Asia. To learn more about how Prolexic can stop DDoS attacks and protect your business, please visit prolexic.com, follow us on LinkedIn, Facebook, Google+, YouTube, and @Prolexic on Twitter.
###