Prophecies of the Last Days: The Great Tribulation and Second Coming 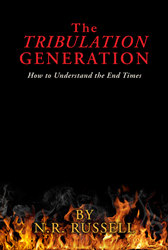 In the not-too-distant future, a ‘ten-king kingdom’ will be formed out of the territory of the ancient Roman Empire.

Is ours the “TRIBULATION GENERATION”—the generation that will experience the “great tribulation” and the Second Coming of Christ? N. R. Russell answers that question in his revolutionary new book The TRIBULATION GENERATION: How to Understand the End Times. In ten easy-to-understand steps, Russell explains what the Bible predicts about the “end times” and where we are today on the apocalyptic timeline.

“In the not-too-distant future, a ‘ten-king kingdom’ will be formed out of the territory of the ancient Roman Empire. The formation of that kingdom will be the sign that the TRIBULATION GENERATION is alive. During that generation, a seven year multi-national ‘covenant’ will authorize the building of a new Jewish temple in Jerusalem. When the seven-year covenant is made, exactly 2,520 days will remain until the return of Christ,” said Russell.

The events of those 2,520 days—the great tribulation—are explained in detail in The TRIBULATION GENERATION. The rise of antichrist, 666, the abomination of desolation, the battle of Armageddon—it’s all there. Russell not only explains what is going to happen; he tells us when it’s going to happen! Readers will take a fresh look at the end times when they read this book.

N. R. Russell is a Christian writer and teacher who lives in Texas. A student of the Bible for more than fifty years, Russell holds academic degrees in Biblical Studies, Education, and English. He is also the author of the book GOSPEL: The Books of Matthew, Mark, Luke, and John, and Acts 1-2, Combined.

Xulon Press, a division of Salem Media Group, is the world’s largest Christian self-publisher, with more than 12,000 titles published to date. The TRIBULATION GENERATION: How to Understand the End Times is available online through xulonpress.com/bookstore, amazon.com, and barnesandnoble.com.