Florida-based firearms manufacturer Adams Arms supports arming America’s teachers nationwide but also cites critical caveat points: that controlled building access, and utilizing an untapped resource of trained expertise ready to protect our soft targets in the way that the U.S. protected our airports after 9-11 are the first line of defense. CEO Jason East is referring to the 665,380 (1) sworn police officers and sheriffs employed but affected by defunding, burnout and targeting ─ as well as the 200,000 military veterans (2) transitioning back into civilian life ─ each with expert firearms training and passion under their belts. 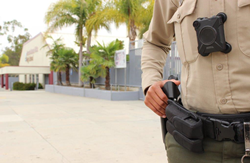 “We have a largely untapped, highly skilled and passionate resource that is capable of altering the current course across every state,” says East. “I’m referring to the many men and women who are military veterans returning to civilian employment and sworn police officers facing burn out."

In the wake of the tragedy in Uvalde, TX, the debate over arming America’s teachers has reignited. At the same time politicians are frantically pointing fingers and seeking solutions, teachers could be considered to shift their role from the teaching center of a child’s educational universe to making split second decisions as an armed security warrior; something they inherently did not study in their desire to teach. (3) “I admire any teacher trained on the proper use of firearms or willing to be trained in securing the classroom, but something to consider is that in the U.S. they should be the second line of defense; behind the school’s structure allowing only one point of entry and being protected by an armed guard,” points out Adams Arms President Jason East.

“We have a largely untapped, highly skilled and passionate resource that is capable of altering the current course across every state,” says East. “I’m referring to the many men and women who are military veterans returning to civilian employment and sworn police officers facing burn out. These are people with a passion to protect and serve and many would gladly trade their current state of service for a focus on the community of a single school, its future adults, teachers and administrators.”

Since the 1900s various federal agencies have created programs and funded security for public schools, as have state and local school boards and local law enforcement agencies. (4) Most recent is the establishment of the Department of Homeland Security in 2002, unifying 22 different federal departments and agencies. They have a vital mission: to secure the nation from the many threats we face in such areas as aviation, border security, emergency response. Their goal is clear - keeping America safe. (5) Taking this one step further, East wants to see federal agencies take the lead and provide a 50-state plan that encompasses every public school in the U.S. and ensures that campuses are reinforced with single entry controlled access, monies would be provided to train teachers willing to take on the added responsibility if it becomes reality, and cost offsets for hiring of armed security every day that a school is in session. “This is a cost that the U.S. needs to shoulder and not leave up to individual states. We did it after 9-11 and should again set a precedent by taking an active role,” notes East.

East adds that while his industry generally favors less federal intervention, and more state control, the school shooting crises are equivalent to national defense, which is a function of the federal government. “There should be a playbook that is standard for every state in terms of protection for our school children that is based on defense in the framework of military and police protection.”

For several years police departments have struggled to recruit, hire and retain officers in the wake of protests, the pandemic, and defunding.(6) Officers cite burnout even as cities begin re-funding police departments in the wake of crime escalation. The situation varies from city to city across the nation as a valuable national conversation has started. In the same timeframe military veterans transitioning to civilian life are seeking out a career path, something that comes easier to some than others.(7) veterans are consistently undervalued in the civilian workforce. Despite their unparalleled training, work ethic and team mentality, far too many struggle to secure meaningful employment: 61% are either unemployed or underemployed.(8) “Both of these groups are highly trained in firearms use and safety, have a passion for serving the public – and could be considered a great resource,” suggests East.

East adds, “As Americans who respect both the constitution’s inalienable rights and its Second Amendment - and are searching for solutions to protect our schools and the generations of future adults, Adams Arms stands firm in having citizens contact their local, state and national congressional representatives to encourage a federal program working in concert with state and local organizations to certify willing teachers to be armed, as well as utilizing a national resource by ensuring the hiring of armed resource officers in every school. In every community. In every state.”