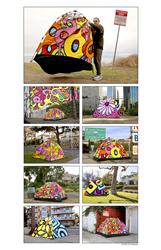 The question becomes how much homelessness will the public tolerate, and are we all willing to make the demands and decisions necessary to deal with the homeless problem the same way we would for a national disaster?

Following up on his public installation of a 7' tall sculpture in Santa Monica dealing with homelessness and the recent federal courts mandate that the homeless cannot be removed from the streets if there is no available housing for them, artist and social activist Ed Massey is laying the groundwork for a massive art installation in 2021 he hopes he never does. But if he goes forward, LA will become a giant public artwork that visually transforms the cityscape including business districts, public spaces, and neighborhoods with or near proximity to the homeless from Malibu, Santa Monica, Brentwood, and Bel Air to Holmby Hills, West Hollywood, and DTLA, among other areas.

The public and every elected official is talking about homelessness, but tough decision-making has led to policy paralysis and for Massey, the level and speed of progress on the homelessness issue in the near term will determine the fate of the project which Massey began developing and testing surreptitiously shortly before the unveiling of the "In the Image" exhibition this past November. Massey is challenging the public to step up its efforts and face the issue head-on and says that if there is accelerated and tangible progress in addressing and mitigating the core issues related to homelessness within the next 12 - 15 months, Massey will shelve the project -- which if it goes forward would be sightly, but an admission of colossal public failure. If the public in its responses to the homeless epidemic continues to demonstrate that the trade-offs of addressing homelessness on a mass level may be too steep or hesitates in confronting the issue as a national disaster with mass mobilization characteristic of that designation, Massey will find an underwriter to transform the streets of LA into the colorful art tent capital of the world by distributing upwards of 5,000 tents to the homeless to replace the monotone and disheveled tents and tent encampments now defining the views of much of Los Angeles, ubiquitous scenes of pitched fabric used as refuge by the mentally ill, addicted, infirm, financially wiped out, and working poor living on the streets. Distribution and street presence activation of up to 5,000 art tents could be accomplished in 7 - 10 days, visually transforming neighborhoods, public spaces, business districts, and becoming a sardonic yet visually stimulating city symbol for residents and visitors alike.

Massey has been in the forefront of many of the largest public art and design initiatives in recent years. Never has he rooted against the possibility of one of his projects coming to fruition. If the project is forthcoming, it will be a symbol of monumental civic failure spanning years. The message: the art tents alone may not improve the day to day of the homeless on the street, but the art tents will birth new colorful city vistas for the rest of us which will make neighborhoods, public spaces, and business districts more visually appealing to the public grown accustomed to living with blighted, unsightly, monochromatic homeless tents encroaching on vast sections of LA. If there are already going to be tents on the streets, art designed tents will bring more welcome views for the public -- and perhaps make the homeless tent issue, spilling into more and more neighborhoods, a bit more palatable for the public, despite the civic lack-of-will they will represent. In the bigger public loss, some residents may see a win. As outlandish as this may appear, Massey points out that the continuing slow-motion and band-aid approach of dealing with homelessness is far more aligned with "outlandish."

Massey -- whose body of work often involves social themes -- emphasizes that the public has some decisions to make if it wants sweeping change. "Answers to the homeless problem are out there. Nobody likes or can defend the current situation. And the associated issues have been identified. The question becomes how much homelessness will the public tolerate and are we all willing to make the demands and decisions necessary to deal with the homeless problem the same way we would for a national disaster?" Until that latter answer is "yes," movement on the issue will be incremental, sporadic, and regrettably even unnoticeable in many of our public spaces, neighborhoods, and business districts," he says. This is one answer -- and perhaps a thorn -- to the inertia.

The artist often works closely with his brother, Bernie Massey, to further public education on social themes and to synthesize and contribute to public understanding of complex contemporary issues that can lead to positive movement. In their view, the public has a choice to make related to a handful of components that are crucial to making major headway on the homeless issue. Broad consensus exists from progressives to conservatives on 4 core categories in need of immediate attention related to the homelessness catastrophe and its consequences to the public's self-interest from safety to public health to environmental concerns. Agreement on a plan of action is mired by competing local interests and perceived self-interests.

Any serious effort to substantially reduce homelessness must contemplate and include the following categories -- immediately, not in a 5 or 10-year plan:

1. Greatly Increase Overall Housing Supply -- There are 50,000+ homeless in LA, but many others who cannot afford their housing payments and are on the brink. Incentivizing and streamlining the approval process for developers to build taller and higher-density residential projects in multi-unit urban areas would increase the acute shortage of affordable housing in LA and SF. The character of some city areas would change. The public choice: decide if that trade-off is worth it or is living with the homeless the better choice?

2. Greatly Increase the Supply of Temporary and Transitional Housing -- There are unused physical assets that exist and could be utilized for people living on the streets or in their cars. Could vacant state and federal buildings and properties be adapted for mass temporary housing and vocational skill development for people recently made homeless by economic catastrophe or in economic distress?

3. Provide Comprehensive Mental Health Treatment with Temporary and Transitional Housing -- The mentally ill make up a large portion of the chronically homeless. Temporary housing alone without mental health treatment and vocational training is a band-aid and not a solution. Could unused federal and state buildings and properties be activated specifically for this category of homeless? Could used and idle cruise ships potentially be brought, utilized, and stationed at Port of LA and Port of Long Beach to help serve some of the above? What other physical assets already exist?

4. Provide Addiction Treatment with Temporary and Transitional Housing -- Addicts make up a large portion of the homeless. Temporary housing alone without addiction treatment and vocational training will not get people off the streets and productive. Could unused federal and state buildings and properties be activated specifically for this category of homeless? Could used and idle cruise ships potentially be brought, utilized, and stationed at Port of LA and Port of Long Beach to help serve this population segment too?

What is the public prepared to say "yes" to?

Massey is rooting for rapid improvement and action so he can devote himself to other projects. At the same time, he is preparing for the moment that 12 - 15 months from now the situation is the same -- the city won't be.

Other CA cities may be included in the initiative as the homeless crisis spans Southern and Northern CA.