Published novel tells a story where things are not what they are seem, where criminals pay and where innocents are absolved 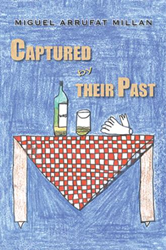 “I had read many crime books. I had written a short story at the university and I wanted to change it a little and continue with the story, so the plot would be more or less the same,” Miguel Arrufat Millan states.

“Captured by their Past” (published by Trafford Publishing in January 2007) is about the mysterious murder of John Brown, a 60-year-old writer who lives in London. Mike Smith decides to visit his friend John one Saturday and, while they are having dinner with John’s children, John dies when he drinks a cup of whisky that has arsenic.

John’s own son has been accused of killing his father and he was arrested. However, Mike, who is a lawyer, is not going to allow John’s son to go to prison. He is going to defend him during the trial, discover the truth and send the real criminal or criminals to justice.

“I think this book will appeal to readers because people like reading thrillers and mystery novels, so I think they will like it,” Millan says. When asked what he wants readers to take away from this book, he answers, “I want people to enjoy and have a good time reading this novel.” For more details about this book, please visit https://www.trafford.com/en/bookstore/bookdetails/186434-Captured-by-their-Past

About the Author
Miguel Arrufat Millan was born 26 June in 1974. He went to school, and then to an institute. He went to the university when he was 18 and studied English Philology. In 2001, he did a Master in Business. He stayed one week in Brussels and a month in Delaware. After that, he made his practicum during three months in a tiles factory in Alcora (Castellón). After that, 11 November 2001, he had an accident and has not worked for almost three years. As he could not work, he wrote this play, which he had already started some time ago. He likes collecting postcards, playing all sports, listening to music, reading books, writing poetry, going to the cinema etc. He is single.

Trafford Publishing, an Author Solutions, LLC, author services imprint, was the first publisher in the world to offer an “on-demand publishing service,” and has led the independent publishing revolution since its establishment in 1995. Trafford was also one of the earliest publishers to utilize the Internet for selling books. More than 10,000 authors from over 120 countries have utilized Trafford’s experience for self publishing their books. For more information about Trafford Publishing, or to publish your book today, call 844-688-6899 or visit trafford.com.