Pul Q. Scye’s new book “Osborne of the Diplomatic Core” is a beguiling space adventure that will surely delight any sci-fi lover out there

Recent release “Osborne of the Diplomatic Core” from Page Publishing author Pul Q. Scye is a coming-of-age novel where a young man stands against an alien race who causes havoc in the POOP. 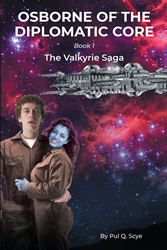 Pul Q. Scye, a former member of US Navy, a talented man who worked in the computer industry for years, a dutiful husband who currently lives in Connecticut with his wife, three cats, and a dog; has completed his new book “Osborne of the Diplomatic Core”: a fun and exciting journey of Osborne through the universe. A man who was once a simpleton decided to leave his family and joined an organization that ensures peace in his home world. Aboard the Valkyrie battleship, his unforgettable adventures begin.

Scye shares, “This is a science fiction book set in the far future, taking takes place on many worlds and in a multitude of varying landscapes.

Most humans have left Earth, which is now a plastic wasteland, well over a millennia ago, and humans have moved out into the universe with the advent of the faster-than-light slip-drive technology, encountering the Planetary Organization in the process.

Osborne lives with his retired father in a world with no name. Osborne begins as a bit of a simpleton, which is how he has lived his entire life. Osborne leaves his father’s house and looking for a custodial position in the Diplomatic Core headquarters. But through a series of bureaucratic snafus and misadventures, he finds himself leaving his home world to serve the Planetary Organization of Peoples, or POOP, onboard the battleship Valkyrie. Osborne meets various challenges and adventures and finds an intense alien love interest with Lieutenant Guzel Tweela. From combating an overthrow of a monarchy, questing for a cure for giant wasp stings, suffering trauma, and additionally dealing with loss, Osborne grows and comes into his own.

Published by Page Publishing, Pul Q. Scye’s intriguing tale transports the readers to different worlds hidden in the vastness of the universe. The author presented a variety of beings and creatures. Plus, the action scenes are to die for.

Will peace ever be attainable in the entire universe? Find out in this enthralling read.

Readers who wish to experience this amusing work can purchase “Osborne of the Diplomatic Core” at bookstores everywhere, or online at the Apple iTunes Store, Amazon, Google Play, or Barnes and Noble.