The Foreign Policy Research Institute (FPRI) will present its 14th Annual Benjamin Franklin Award for Public Service to Anne Applebaum at its 2018 Annual Dinner on Wednesday, November 7, at the Union League of Philadelphia. 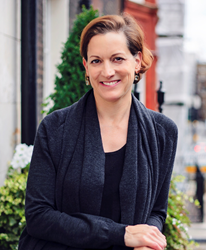 The Foreign Policy Research Institute (FPRI) will present its 14th Annual Benjamin Franklin Award for Public Service to Anne Applebaum at its 2018 Annual Dinner on Wednesday, November 7, at the Union League of Philadelphia.

Seating is limited, and both individual tickets and tables are available for purchase. For pricing information or sponsorship opportunities, please contact Eli Gilman at - egilman@fpri.org or at 215-732-3774 ext. 103.

A Pulitzer-prize winning historian, Anne Applebaum is a columnist for the Washington Post and a Professor of Practice at the London School of Economics’ Institute of Global Affairs, where she runs Arena, a program on disinformation and 21st century propaganda. Formerly a member of the Washington Post editorial board, she has also worked as the Foreign and Deputy Editor of Spectator magazine, as Political Editor of the Evening Standard, and as a columnist at Slate and at several British newspapers, including the Daily and Sunday Telegraphs. From 1988-1991 she covered the collapse of communism as the Warsaw correspondent of The Economist magazine and the Independent newspaper.

Her newest book, Red Famine: Stalin’s War on Ukraine was published in October 2017. Her previous books include Iron Curtain: The Crushing of Eastern Europe, 1944-1956, which describes the imposition of Soviet totalitarianism in Central Europe after the Second World War. She is also the author of Gulag: A History, which narrates the history of the Soviet concentration camps system and describes daily life in the camps, making extensive use of recently opened Russian archives as well as memoirs and interviews. Gulag won the Pulitzer Prize for non-fiction in 2004.

"At this critical moment in history," said FPRI President Alan Luxenberg, “when democracy appears to be on the wane while authoritarianism is on the rise, there are few people better able to assess where we are and where we are headed than Anne Applebaum, who has studied the cruelties of tyranny in history while observing a world in transition today." Hence, she will address the theme of "Dictators vs. Democrats in the 21st Century: A Scorecard."