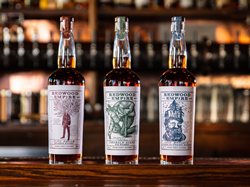 Each whiskey blend is inspired by its namesake of an ancient tree protected by our US National Parks System: Pipe Dream Bourbon, Emerald Giant Rye and Lost Monarch are all names of sky-scraping trees that serve both as the muse that inspire each bottle’s unique aesthetics and blend formulation.

Purple Wine + Spirits today announced its Redwood Empire Whiskey brand is launching three uniquely hand-crafted, barrel aged, California whiskeys: “Pipe Dream” Bourbon, “Emerald Giant” Rye, and ”Lost Monarch,” a blend of straight American whiskey. All three whiskeys are select blends of aged whiskeys between 4-12 years and are showcased in exciting new labels inspired by California’s most iconic conservationist, John Muir. In conjunction with the launch, Redwood Empire Whiskey is partnering with Trees for the Future (TREES), an NGO responsible for planting over 170 million trees since 1989. As a result of this harmonious partnership, Trees for the Future will plant a tree for every bottle of Redwood Empire sold.

Redwood Empire Whiskey embodies and expresses the authentic character of its Sonoma County, CA origins: the heart of California’s majestic Redwoods. The Redwood Empire is a stretch of land that is home to uniquely indigenous trees that are some of the tallest on earth. Each Redwood Empire whiskey blend is inspired by its namesake of an ancient tree, revered, identified by name, and then protected by our US National Parks System. They include: Pipe Dream Bourbon, Emerald Giant Rye and Lost Monarch, all designated names of sky-scraping trees that serve both as the muse that inspire each bottle’s unique aesthetics and their blend formulation.

When creating each expression of Redwood Empire Whiskey, the small distilling team of four, led by head distiller Jeff Duckhorn, takes a handcrafted, sustainable approach to whiskey production. Each member of the team touches every aspect of the production process from grain to glass. The smooth, complex flavor profile is the result of what the Redwood Empire team has dubbed, “Sonoma-boutique style.”

“We set out to create a portfolio of whiskeys that are a true reflection of the spirit and landscape of our Northern California home – rugged, pioneering, adventurous, and aesthetically beautiful,” says Duckhorn. “Sonoma County has been an early pioneer of the craft beverage scene, starting with wine, and in recent years, beer; we believe that now is the time for spirits to gain attention as the next stage of Sonoma’s craft beverage story.”

Influenced by John Muir and holding a deep respect for the immense forests surrounding the distillery in Sonoma County, Redwood Empire Whiskey has entered into a partnership with TREES, an international development nonprofit that seeks to alleviate poverty, eradicate hunger and heal the environment. TREES trains farmers to plant and manage Forest Gardens that help them sustainably feed their families, raise their incomes and end deforestation. The cause resonates strongly with the ethos of Redwood Empire Whiskey, and the company is proud to announce that for each bottle of Redwood Empire Whiskey purchased, TREES will plant a tree.

Helmed by industry veteran Derek Benham, Purple Wine + Spirits built its still and began whiskey production in 2014, followed by the launch of the Redwood Empire Whiskey label in 2017 with a single product, Redwood Empire American Whiskey. The distillery now produces and barrels over 20,000 cases of whiskey annually. The brand was launched just ahead of a spike in growth for the American-made premium spirits category; in 2018, bourbon grew 28%, rye was up 40% and blended whiskey grew 26%1. “With this launch, we now offer a portfolio of craft premium whiskeys, all in high growth segments,” says Benham. “Craft whiskey drinkers in the U.S. are growing in number, and they’re looking for new brands, origins and style. We’re proud to offer them an authentic Sonoma brand that isn’t like any other whiskey.”