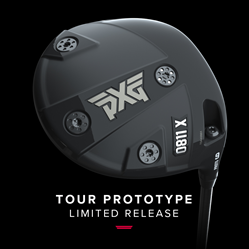 PXG has announced that a limited number of its PXG 0811 X and X+ Tour Prototype Drivers are being made available to golfers for purchase.

We believe we've created something special and are looking forward to getting feedback from average golfers, like myself, in the coming weeks.

What happens when your PGA and LPGA Tour staff fall in love with a prototype? If you're PXG, you release a limited quantity of the prototype while continuing to engineer the final design.

PXG has announced that a limited number of its PXG 0811 X and X+ Tour Prototype Drivers are being made available for purchase. The release is predicated on the response from the company's tour players during early testing and the desire to get additional feedback from the golf community.

Media and golfers alike started to take notice of the 0811 Proto Driver in February of this year, when it first appeared in the hands of players like Ryan Moore, Wyndham Clark, and Pat Perez. PXG openly tests prototypes on tour to ensure top performance under the most challenging conditions.

The emergence of a product on tour does not mean the company is close to a release. Case and point, the prototype driver that was in James Hahn's bag when he won the Wells Fargo Championship in May of 2016. The specific driver design was never released to consumers as it did not meet all of PXG's performance requirements. In the words of company founder Bob Parsons, "it may have been good enough to win on tour, and it went like hell for James, but I didn't think it was ready for our customers yet. We wanted to work on the sound." Hence the engineers kept iterating. The final design, featuring the introduction of PXG's honeycomb TPE insert, was ultimately released ten months later.

The PXG 0811 X and X+ Proto Drivers appear to check all of the boxes for PXG's tour pros – distance, dispersion, sound, feel, looks, and forgiveness. By making a limited number of both models available to the most important golfers it serves, PXG’s customers, the company will further expand its opportunity for performance feedback – PXG's only measure of success.

"We’re excited to offer a limited number of our 0811 X and X+ Tour Prototype Drivers to PXG's customers," Bob Parsons shared. "We believe we've created something special and are looking forward to getting feedback from average golfers, like myself, in the coming weeks."

The PXG 0811 X and X+ Proto Drivers are designed to be fitted for a golfer's angle of attack to help deliver top performance off the tee. The 0811 X is a low center of gravity, lower spin option for players with more level or downward attack angles. The 0811 X+ is a mid-center of gravity, mid-spin option for players with upward attack angles. Both models are engineered to deliver faster ball speeds, more distance and more forgiveness.

The 0811 X Proto driver is available in a 9-degree loft option and the 0811 X+ in 10.5-degrees. Only right-handed clubheads are available for the tour prototypes.

For more information or to schedule a fitting in person or over the phone, please visit http://www.PXG.com.