A mass of new data has revealed that global crowdfunding is growing exponentially, doubling every two months, so outstripping Moore’s Law of computing power by a factor of ten. Info-graphic included, see more at The Crowdfunding Centre. 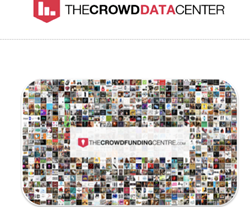 A mass of new data has revealed that global crowdfunding is growing exponentially, doubling every two months, and outstripping Moore’s Law of computing power by a factor of ten.

The first major release of data and analysis from The Crowd Data Center for the first quarter of 2014 reveals that global crowdfunding is consistently doubling every 60 days.

The UK grew faster still in February and March achieving a growth rate of 350% - in March more money was pledged in the UK than in January and February combined.

Welcomed as a landmark in crowdfunding, the report is drawn from a new resource for crowdfunding dubbed ‘The Crowd Data Center’ which aims to become the ‘Oracle’ of crowdfunding, able to answer specific and detailed questions for governments and regulators as well as crowdfunders and all those who advise and support them. It has already collected data from more than 75,000 crowdfunded projects worldwide and grows by thousands more every week.

The report has been welcomed by Jason Best, recognized as a global leader in the crowdfunding field.

Best, co-founder at Crowdfund Capital Advisors and co-architect of the JOBS Act, said: "Data is critical in driving the development of any industry and none more than crowdfunding. The ability to document money invested, jobs created, sales growth, new company starts, etc. are all vital to demonstrate to regulators and investors that this market is the modern finance market and one that should be embraced.”

His thoughts are echoed by Dr Richard Swart, Global Crowdfunding and Alternative Finance Researcher at University of California, Berkeley, who said: “This report is a crucial development for our field. With such a fast moving market, growing exponentially, it is extremely important that policy makers, educators and professionals have a resource to track funding patterns. The Crowd Data Center has laid the foundation for a data set that can change the industry.”

Barry James, founder of The Crowd Data Center, a new online facility which collected the data which is being launched alongside the report, explained: “We are now providing an online living-map, a kind of Google Earth for crowdfunding, that is able to give you hard data and answer the specific questions that really matter when planning a campaign, running a platform, thinking about investment strategies or making regulation and legislation.

“No one need be in the dark any longer.

“We already knew, but this confirms, that crowdfunding is an established multi-billion-dollar industry. We now know it is growing at a prodigious rate, what that rate is, and that it rivals and surpasses Moore's Law of computing power that has so transformed business and the global economy, growing at around ten times the rate, doubling roughly every two months,” said James.

“We've seen the effects of eCommerce and ePublishing. Now we're witnessing the very beginning of eFinance and the eFunding Escalator.”

The inaugural report tracks and quantifies growth through the first quarter of 2014 providing new insights into the nature as well as the size of crowdfunding in the USA, UK and worldwide.

“We are at the point in time where Big Data meets crowdfunding, whose open-by-default nature lends itself well to that, having already captured around 3 million snapshots and adding more than 22,000 every day,” James confirmed.

The data is essential not only for those crowdfunding projects, but also for the crowdfunding platforms and everyone supporting entrepreneurs and ventures.

Bill Morrow, CEO and founder of Angels Den, says: "The CrowdFundingCentre.com is our go-to for What's happening in the super-dynamic world of crowdfunding.

“Their passion and technical expertise are amazing. We consider them to be at the centre of the ecosystem and our success in angel crowdfunding is in no small part down to their site."

Ruth Hedges, founder of Global Crowdfunding Day and CEO of The Crowdfunding College agrees: “It is so important the work that The Crowdfunding Center is doing for the entire industry. As we grow worldwide this type of data and information will play a big role in helping to advance the educational material we create to improve the success rate of all crowdfunding campaigners and issuers.

Professor Alan Barrell, Entrepreneur in Residence at Cambridge University’s Judge Business School, commented: “This is the first report of its kind and is immensely valuable in providing a mass of real data from more than 75,000 crowdfunds since January 2014 – a feat of a great magnitude in itself.

“While this landmark report is especially important at this time since it answers - from the data - so many of the questions people ask when the word ‘crowdfunding’ is mentioned, it is more than that. The Crowd Data Center itself is now providing an ongoing online resource that can answer pressing questions and keep the world up to speed on what some of us have felt for some time is an unstoppable phenomenon in the making.”

Infographics can be viewed at....
http://thecrowdfundingcentre.com/infographics

The Crowd Data Center captured almost 3 million daily project status snapshots in the first quarter of since 2014 (1,915,306). The results are fascinating.
1. More than 4m backers pledged more than $351m and raised more than $291m
2. A new crowdfunding project is created every 3 minutes, with around 500 new projects created every day.
3. Global crowdfunding is growing steadily, more than doubling every 60 days.
4. There are between 18,000 and 22,000 projects open and funding at any one time.
5. All or Nothing campaigns tend to raise more: the average amount projects have raised successfully across platforms is $7,145.01, but that figure drops to $4,516.46 when you include flexible funding projects.
6. If you want to be sure of success, you need one in four of your friends to back you. The average successful project has 56 backers, which means the average person needs to get a quarter of their friends to back them to succeed (worldwide the median number of Facebook friends people have is 200).
7. People invest more on equity crowdfunding platforms. The average Kickstarter campaign raises $19,000 from 253 people, whereas the average Crowdcube campaign raises $311,000 from 117 people.
Q1 stats:
Total Pledges: 4,047,856
Total Pledged: $351,174,819.50
Total Raised (Fully funded): $261,538,013.51
Total Raised Amount (Fully funded plus flex): $291,398,557.55
Additional/Optional Quotes

“As an economist it has long been clear to me that Crowdfunding is a fascinating, disruptive, phenomenon with huge implications for entrepreneurs, ventures, investors, economies and governments around the world. We need 'big data' and the tools to get to grips with and understand it. This landmark study and the massive and growing database of over 75,000 projects that underpins it gives us just that - and promises many more fascinating and valuable insights into Crowdfunding and the rise of eFinance.”
Victoria Silchenko, Huffington Post Columnist & Founder, The Metropole Capital Group

“The depth of research in The State of The Crowdfunding Nation is truly remarkable. I will use this data time and again for the articles I write, the speeches I give and in my day-to-day work in the crowdfunding realm. Everyone involved with crowdfunding MUST have a copy of this report on hand for its endlessly important and valuable insights.”
Kendall Almerico, Crowdfunding Attorney, JOBS Act Expert, and CEO of FundHib.Biz, Tampa, Florida

“At last we have hard data in real-time to allow us to see and track the ongoing phenomenal growth of crowdfunding. Now it's just a question of time before it becomes fully main stream as the vehicle of choice for those looking to raise funds and for those wishing to back exciting new innovations on platforms such as CrowdMission.”
Karen Darby, Founder, CrowdMission

"This report compellingly summarises a breadth and detail of data that clearly illustrates the staggering rate and pace of recent growth in crowdfunding. As a comparative study of platforms, the report is invaluable for researchers in helping them identify salient areas for further enquiry and leading to widely useful research findings more quickly and easily than would otherwise be possible."
Dr Jo Briggs, Anniversary Research Fellow and Principal Investigator on a crowdfunding research project, Northumbria University, Newcastle-upon-Tyne.

About:
The Crowd Data Center
A new resource where 'Big Data' meets crowdfunding for the first time. Available to all with a growing range of evidence based data-driven tools designed to make mining the invaluable gems, the killer insights, easy and approachable for crowdfunders and all those that need them. Now, you can access the data behind thousands of crowdfunding projects launched in the UK and US, find out which platforms perform the best and which categories are the most popular. The data shows how many £s and $s are pumped into projects every minute.
http://www.crowddatacenter.com

Login at TheCrowdfundingCentre.com to see the latest tools as well as the latest trends, and trending projects and ventures.