Q.Digital to honor Angelica Ross with the Groundbreaker Award; Billy Eichner with the MVP Award at the 2021 Queerties 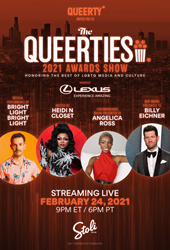 Our readers are incredibly tuned in to pop culture, so the Queerties provide a perfect outlet to make their voices heard

Q.Digital and Lexus will present Angelica Ross with the Groundbreaker Award at this year’s Queerties, the annual award show produced by Queerty celebrating the best in LGBTQ culture and media. Billy Eichner will receive the MVP award for inspiring a get-out-the-vote campaign while staying safe throughout the pandemic.

“I’ve been voting for the Queerties as a fan for years, so it’s very exciting to not only be a nominee this year but the host of the show!” said Drag Race star Heidi N. Closet. “I’m honored to help celebrate so many amazing and diverse members of our community, and the incredible work they put out during such a challenging year.”

The awards ceremony will stream live at 6pm PST / 9pm EST on February 24 at Queerty.com as well as on its Facebook and YouTube pages. Revry will for the first time broadcast the event (including Revry’s third-party channels on Samsung TV Plus, Roku Channels, Xumo, Stirr, Apple TV).

“Our readers are incredibly tuned in to pop culture, so the Queerties provide a perfect outlet to make their voices heard,” said Tracer. “This year is extra exciting because the show is streaming digitally so voters from all around the world get to attend for the first time!”

Rebroadcasts will also be available on Revry to watch for free On Demand.

About Q.Digital
As an LGBTQ-owned and operated, National Gay and Lesbian Chamber of Commerce & ANA certified business enterprise, Q.Digital is the trusted voice for news, entertainment, and travel in the LGBTQ community, reaching a highly engaged audience of more than 9.5 million per month. Q.Digital connects brands to the market through its digital properties— Queerty, the popular entertainment and pop culture site; GayCities, the travel site covering 238 destinations worldwide; and LGBTQ Nation, America’s most-followed LGBTQ news source.

Q.Digital is an indispensable resource for individuals seeking inspiration for their life’s experiences. Q.Digital enables major brands such as Hulu, Gilead, Lexus, and MasterCard to connect with an LGBTQ audience on a personal and credible level through branded content, custom video, events, and promotions. Digital programs and custom events include the Queerties (February), Pride 50 (May to July), Heroes (September), and Best of GayCities (December).
Media Contact: Adam Salandra
adam@q.digital

About Queerty
Queerty is the leading entertainment brand for and inspired by the LGBTQ community. It is the most-visited website in the United States LGBTQ market and the #1 website for U.S. LGBTQ Millennials. Queerty is owned and operated by Q.Digital, Inc. For more information, please visit http://www.queerty.com, and find @Queerty on Facebook, Instagram, and Twitter.