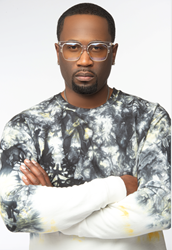 Our projects will be ambitious, center around real life experiences and driven by characters on screen we foresee making a global impact in the faith and family film genres” says Parker

Multi Grammy Award-Winning Singer/Songwriter Q Parker launches a new production company, Q Parker Productions, which will focus on creating a series of faith-based content that bridges the gap between mainstream and gospel. As part of the launch, Q Parker Productions has signed an exclusive production deal with Manns-Mackie Studios (My Brother’s Keeper) to develop and produce film titles for global release.

Parker attained mega success with his group 112 and now is shifting gears to focus on creating faith-based stories that are committed to attaching diverse and underrepresented talents to star and bring these titles to life. “In addition to being an immensely talented singer, Q is also an accomplished creative and we are privileged to be in partnership with him as we expand our efforts in developing faith based films with strong messaging and integrating up-and-coming talents and new voices” says Ty Manns, Principal at Manns-Mackie Studios.

His partner Bishop Charles Mackie adds “this is about creating family and faith based generational films that will entertain, educate, be relatable and transcend cultures.”

The first feature film titled “Rescue Me” a story of success, tragedy and redemption is currently in pre-production with an anticipated theatrical release in summer 2020. Whittley Productions comprised of Dora Whittley, Matt Ables, Michael Whittley and Tirrell D. Whittley (Brian Banks, Amazing Grace) will also join efforts as co-producers. “Our projects will be ambitious, center around real life experiences and driven by characters on screen we foresee making a global impact in the faith and family film genres” says Parker.

Manns/Mackie Studios (MMS) is a concept-to-consumer faith & family-based feature film production company founded by Ty Manns (A Question of Faith) and Bishop Charles Mackie (My Brother’s Keeper). MMS and its production partners are committed to producing exceptional faith and family content for all ages, specializing in compelling and positive Urban faith & family stories. The Studio focuses on producing what they call, “Generational Films.” Films which generations of family members can come together and enjoy either in theaters, church sanctuaries, schools, on DVD, TV and smart devices, or in the comforts of their homes, globally.

As a proud parent and supporter of charitable causes, Q has lent his name, time and resources to Big Brothers Big Sisters of Atlanta and St Jude Hospital to name a few. His foundation, the Q Parker Legacy Foundation (QPLF) mission is to create strong foundations that will result in sustainable and energetic communities, family engagements and social empowerment that will build and strengthen families throughout the city of Atlanta. His commitment to community enrichment and youth charitable organizations is never ending.

“Rescue Me” is a story of success, tragedy and redemption. When tragedy strikes the highly successful R&B artist, Deonte Taylor, he’s jailed and loses his career and family. While imprisoned, Deonte meets a once rising musician serving a life sentence that helps start his journey to Christ. After Deonte is released, his riches gone, he is forced to start over with nothing. If he wants to earn back his fame, and most importantly his family, he must turn away from his sinful past, accept his new humility and turn to God for his redemption and rescue.

“Rescue Me” will feature new hit music written and produced by Q Parker of 112 and star some of the most recognizable and talented R&B and Christian artists in the country.

“Rescue Me” is being written by screenwriter and storyteller, Ty Manns (A Question of Faith” and “My Brother’s Keeper.”)