Precision machining manufacturer, QCMI, reaches its 35 year milestone. The award-winning company attributes its longevity to its leadership and skilled employees. 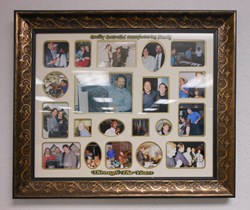 'As we mark our 35th year milestone, we have nearly a million hours of machining capacity ready to meet the needs of today’s world marketplace,' said Founder and CEO Bob Grande

Quality Controlled Manufacturing Inc. (QCMI) celebrates its 35th anniversary on Oct. 19, 2013. Founded in 1978 by William R. (Bob) Grande in his garage, the San Diego County precision manufacturer has grown to 100 employees with three facilities totaling 98,000 sq. ft. The company plans to celebrate its success and longevity with a dinner for all employees and their guests at the San Diego Wine & Culinary Center later this month.

As background, Grande served as a U.S. Army E-4 Specialist during the Vietnam War from 1972 to 1974. He enjoyed working with his mind and hands. His understanding of machine tools and what those tools were capable of fueled Grande’s dream of founding a machining business to "Define the Future in Manufacturing.” He went on to launch QCMI with two employees in 1978, and the rest they say is history.

As a Nadcap accredited for nondestructive testing, ITAR registered and ISO 9001/AS 9100 certified company, QCMI specializes in the precision machining of all metals including exotic alloys. The company produces components with complex shapes, contours, exacting tolerances and stringent quality requirements. It manufactures parts and assemblies for the aerospace, power generation, Department of Defense (DOD), oil and gas, marine and heavy equipment industries.

QCMI has weathered five economic recessions over its three and a half decades. Times have changed--from manual machining in Grande’s garage to the more than 50 computer numerical control (CNC) machines in its 65,000 sq. ft. facility and corporate headquarters in Santee, California. As a family-owned business, Grande has hired his four sons: in 1995 Doug Grande, Business Development; Bill Grande, Second Shift Supervisor; Jeff Grande, Quality Manager / Lean Coordinator; and in 1997 Tommy Grande, Production and Planning. It is also noteworthy that almost half of the QCMI’s employees have been with the company for more than 15 years.

“QCMI’s success starts with our people. Together, we work hard every day to produce quality parts and components for our customers,” said CEO Bob Grande. “As we mark our 35th year milestone, we have nearly a million hours of machining capacity ready to meet the needs of today’s world marketplace.”

QCMI has grown to include a 65,000 square foot manufacturing facility in Santee, California -- with nearly a million hours of machining capacity.