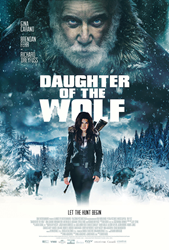 Daughter Of The Wolf - Official Poster

“We’re delighted to present the film for buyers during the market and highlight the incredible action sequences and the compelling fight Clair (Carano), embarks on to save her son.” - VMI Worldwide President Andre Relis

QME Entertainment, and VMI Worldwide, have released the official poster for the highly anticipated action thriller DAUGHTER OF THE WOLF. Starring Richard Dreyfuss, Gina Carano and Brendan Fehr, the film hits theaters in the U.S. on May 10, 2019.

QME co-founder Kevin DeWalt of Minds Eye Entertainment says, “We are ecstatic at how the film has come together and elated to bring it to U.S. audiences this May. In a rousing time for female leads, Gina Carano delivers a nuanced performance. Doing the bulk of her own stunt work, she created a character who exudes both physical and mental strength. It was also a thrill to work with the incredible film icon Richard Dreyfuss who played our villain so magnificently.”

VMI Worldwide President Andre Relis added “We’re delighted to present the film for buyers during the market and highlight the incredible action sequences and the compelling fight Clair (Carano), embarks on to save her son.”

After the death of a family member, ex-military specialist, Clair Hamilton, returns home from her tour in the Middle East. When word spreads about Clair’s large inheritance, her son Charlie is kidnapped and held for ransom by a local gang led by a mysterious figure known only as “Father”. Desperate to save her son, Clair captures one of his kidnappers and forces him to lead her on a perilous journey deep into the Alaska Mountains. To rescue her son, she must form an unlikely alliance with the kidnapper and survive the wild of the far North.

ABOUT QME ENTERTAINMENT:
QME Entertainment is a joint venture between Quiver Distribution Inc., a boutique agency supporting independent producers and distributors, and Minds Eye Entertainment, an internationally recognized production company. QME's mandate is to distribute high caliber, commercially driven films across all platforms in North America. THE HUMANITY BUREAU starring Nicholas Cage was the first picture to be released under this venture, followed by DISTORTED starring John Cusack and Christina Ricci in the Spring of 2018.

ABOUT VMI WORLDWIDE:
VMI Worldwide is one of the leading sales, film finance and production companies founded in 2010 by Andre Relis. VMI has an impeccable reputation in the industry by building a strong collaborative and transparent relationship with filmmakers, financers, and distributors. As well as having represented a wide variety of independent films in all genres and thousands of hours of documentary and music content. VMI's goal is to establish long-term partnerships with the filmmakers, financers, and distributors we work with by building strong/honest relationships, while acquiring and producing cast driven, commercial and marketable feature films, documentaries and TV content. We work hand in hand with our partners to ensure all aspects of our business are transparent and collaborative. VMI’s titles include: ARKANSAS starring Liam Hemsworth, John Malkovich and Vince Vaughn, GRAND ISLE starring Nicolas Cage and Kelsey Grammer, WAKE UP starring Johnathan Rhys Meyers and Francesca Eastwood, THE CHINESE WIDOW starring Emilie Hirsch and Crystal Liu, etc.

ABOUT FALCONER PICTURES:
Established in 1998, Falconer Pictures is a Los Angeles based film company with offices in Ottawa, Canada. The company is focused on the development, financing and production of independent and studio based films. Upcoming films include Daughter of the Wolf" starring Gina Carano, Richard Dreyfuss and Brendan Fehr, "Why Should White Guys Have all the Fun" starring Jamie Foxx, "Superstition, Rules of 3’s" starring Ludacris, The Magician, The Marlin Briscoe Story and "Tell Me Why I Don't Like Mondays".

ABOUT THE FYZZ FACILITY:
The Fyzz Facility is a proliﬁc production and ﬁnancing company specializing in feature film content and international television drama series. The company has invested more than $295m into over 222 feature ﬁlms with an aggregate production spend in excess of $2bn. Recent in-house productions include US box oﬃce smash hit 47 Meters Down, The Strangers: Prey at Night and Jackie Chan’s The Foreigner, which has notched up over $140m box office worldwide.