Quantum Sails is often selected by high-performance sailors who are bold, strong, and smart. We are excited to announce our partnership with Boris Herrmann, one such sailor and one of the most experienced sailors in the industry. Herrmann will be flying Quantum Fusion M VX racing sails for his campaign to the 2020 single-handed, nonstop, around-the-world Vendée Globe race. 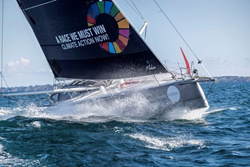 “It has been great to work closely with Quantum Sails to create a bespoke set of sails for Malizia II,” said Boris Hermann. “I am looking forward to covering many ocean miles including big transatlantic races with them over the coming months.”

Quantum Sails is often selected by high-performance sailors who are bold, strong, and smart. We are excited to announce our partnership with Boris Herrmann, one such sailor and one of the most experienced sailors in the industry. Herrmann will be flying Quantum Fusion M VX racing sails for his campaign to the 2020 single-handed, nonstop, around-the-world Vendée Globe race.

Herrmann will be the first German to compete in the Vendée Globe and will campaign as part of Team Malizia aboard the Malizia II through the Yacht Club de Monaco. Malizia II measures in at 18.28m long and has a 29m mast. The boat is a state-of-the art IMOCA 60 with hydro foils and is one of the fastest racing monohulls on the water.

Herrmann and his team have worked closely with Quantum Sails over the last year to create custom sails for the yacht. Quantum Sails’ iQ Technology design process aims to equip Herrmann’s program with added speed, durability, and security. The custom sails will be tested, optimized, and refined over the next year through six transatlantic crossings leading up to the Vendée Globe.

The Vendée Globe was founded in 1989 by Philippe Jeantot and occurs every four years. The race starts and finishes in Les Sables-d’Olonne, France, and is considered the pinnacle of yacht races. The race takes sailors down the Atlantic Ocean to the Cape of Good Hope, then through the Indian Ocean, across the Pacific and back up the Atlantic to France after rounding Cape Horn. The current record is 74 days, 3 hours, 35 minutes, and 46 seconds.

“Quantum Sails is proud to power Malizia II and support Boris in his offshore ocean race campaign,” says Ed Reynolds, president, Quantum Sails. “The Quantum brand and especially our iQ technology are synonymous with performance and quality, and we are looking forward to helping Boris as he campaigns to the Vendée Globe with some of the most competitive races running today.”

“It has been great to work closely with Quantum Sails to create a bespoke set of sails for Malizia II,” says Hermann. “I am looking forward to covering many ocean miles including big transatlantic races with them over the coming months.”

Herrmann’s resume boasts some of the toughest regattas in the world, including the Barcelona World Race; the Mini Transat race, a single-handed yacht race across the Atlantic; the European Championship and German Championship in the 505 class; and the Artemis Transat, the oldest transatlantic regatta for single-handed yachts. He won the Portimão Global Ocean Race, a five-leg, around-the-world regatta for Class 40 boats. Additionally, Hermann recently competed in the Rolex Fastnet Race, finishing strong in the twenty-yacht IMOCA 60 fleet. The Malizia II crossed the finish line after 2 days, 3 hours, 12 minutes, and 24 seconds at sea. The yacht race is one of the UK’s most prestigious and the world’s largest offshore race.

Saving the oceans and our environment

Team Malizia is a German program supported by the Yacht Club de Monaco, and its education program has the backing of the Prince Albert II de Monaco Foundation. Team Malizia was founded by Pierre Casiraghi and skipper Boris Herrmann. The duo have taken on the battle to raise awareness of climate change and ocean science, protection, and education around the world. They’re doing this by not only by involving and inspiring the next generations of sailors, but also by assisting in vital research.

A special sensor has been designed and installed on Malizia II that will allow scientists to monitor CO2 levels, temperature, salinity, and pressure in hard-to-reach locations all over the world. This data will be available to scientists worldwide to help find solutions to the deterioration of the oceans caused by global warming, pollution, plastic waste, and overfishing, to name but a few. Additionally, Team Malizia is using these partnerships as a platform to help educate children and empower them with the knowledge and drive to help make a change.

As part of this mission, Hermann and Team Malizia are sailing environmental activist Greta Thunberg to the UN Climate Action Summit in New York City. The boat sets sail today, August 14, from England on the approximately two-week journey across the Atlantic. The Swedish teen does not fly due to the impact flying has on the environment. When Greta was invited to join the summit, Team Malizia raised their hands to get her to the summit emission-free.

You can learn more about Team Malizia and their Malizia Ocean Challenge, as well as their 2020 Vendee Globe campaign at http://www.borisherrmannracing.com and https://www.facebook.com/teammalizia. Also, go to http://www.quantumsails.com for more information and to keep up-to-date on this news and the latest technology innovations from Quantum Sails.

About Quantum Sails
Formed in 1996, Quantum Sails is the second largest sailmaker in the world with headquarters in Traverse City, Michigan, and a network of over 60 owned and affiliated sail lofts around the globe. The company provides sailing solutions to racing and cruising sailors at all levels, helping them pursue their passion and meet their sailing challenges.