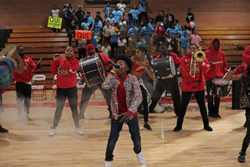 The fast pace drove and pushed me to become a better artist and to have more respect for my craft.

B.M.B. Record’s 13-year-old rap artist Que 9 who made quite a splash with his celebrated lead single “Splash” earlier this year, is about to start an epidemic of seismic proportion with his new full-length EP Epidemic dropping nationwide on November 11, 2016.

After the success of Que’s summer hit “Splash” which had thousands of kids young and old taking a stab at what became known virally as #QueSplashChallenge; the ambitious entertainer got in the lab with Florida beat makers “The Crew” (Jace and Brisk) to expand his body of work. The marathon recording session that ensued led to the Epidemic project that Que is now referring to as his greatest accomplishment.

“Other than 'Splash,' me and The Crew created and recorded the entire album in 3 days…this was the hardest I’ve ever worked in a studio. The fast pace drove and pushed me to become a better artist and to have more respect for my craft,” explains Que 9 of the recording process of Epidemic.

B.M.B. Records CEO Brian Maurice Brown beams with pride when it comes to Que, born Quarrion Phillips. He states, “I’m amazed by his rapid growth, humility and the evolution of his content and work ethic” In terms of the music, Brown describes singles “Pep Rally” as an “anthem for getting athletes and grinders in general motivated and explains that “FaceTime speaks to people of all ages and is extremely related in today’s culture.” BMB’s visionary added that the Motor City based independent label will be putting its full arsenal of support behind Epidemic and for the personal and professional development of Que 9. There will be a promo tour and exciting visuals for select singles in the coming weeks.

While the rising rap star has blessed countless stages across the country with his electric showmanship and rambunctious delivery, his first big show was 2015 Summer Jam in his hometown. From there he joined the I Wanna See You Dance Tour line up where he held his own among other popular teen rappers Lil George and Silento, I Heart Memphis, We R Toons and D Low on a few city stops. He has been profiled on prominent local TV news programs and featured in national press outlets including Complex, thisis50.com, allhiphop.com, XXL and most recently spotlighted in the Michigan Chronicle and Detroit’s Metro Times.

Citing his fans as his motivation, the young influencer thinks of his supporters as family and takes personal responsibility for the content and impact his work has on them. As the project’s name suggests, Quarrion is aiming for his music, and its positive message to start an epidemic of infectious, feel good, age appropriate music that kids of all ages can relate and dance to. Epidemic (B.M.B. Records) is now available online everywhere.

To learn more about Que 9 visit http://www.bmbempire.com. For booking and other inquiries contact bmbentertainmentgroup(at)gmail(dot)com.