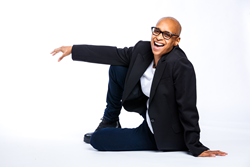 I endeavor to use to use my platform to raise awareness for the important themes of family reorientation, conflict resolution and financial literacy in our communities.

On the heels of releasing her 16th book, "Thugs: Seven," publisher, author and motivational speaker Wahida Clark—who went from prisoner to 4-time New York Times bestselling author—will now be taking her fans on a raw and riveting journey in an upcoming docu-series, “The Queen of Street Lit,” a moniker she proudly wears for having initiated the Thug Love Fiction sub-genre. Directed by Antonio T.D. Faison, the project is currently in production, shooting in and around Atlanta, Georgia, Pennsylvania, New Jersey, Miami, New York and Ghana.

The series delves into the rich and complex story of Clark from her troubled youth to her lofty status atop the Street Lit genre. With some notable celebrity appearances, the project also spotlights the Thug Love Fiction genre and its effects on Hip-hop and urban culture.

Clark says, “By reading our under-celebrated Street Lit and Thug Love Fiction genres, we can heal. We promote literacy and address mental illness in our households through storytelling. I endeavor to use to use my platform to raise awareness for the important themes of family reorientation, conflict resolution, and financial literacy in our communities.”

Clark’s fascinating journey includes serving nearly a decade in federal prison—with one-time prison mate and media mogul Martha Stewart—to owning the most prestigious and fastest growing urban independent publishing house Wahida Clark Presents Publishing, which empowers other incarcerated authors to write and get published so they can support their families.

Clark’s publishing banner, is proud to debut her 16th novel, “Thugs: Seven”(December, 2019), the seventh installment in one of her three popular series, The Thug Series.

No stranger to adversity, Clark was a runaway and high school drop-out at 14 years old, and eventually, facing 10 years in prison, she decided to turn obstacles into opportunity.

While in prison, Clark herself took a creative writing course, wrote her first novel, landed a literary agent and book deals with major publishing houses, including Kensington, Hachette and Simon and Schuster—so she could support her two daughters back home. Her literary career catapulted her from behind bars into a 4-time New York Times Bestselling author, and that first book launched just one of her three renowned series.

Clark is also the vice president and business development officer of the 501c3 non-profit Prodigal Sons and Daughters, which offers proven rehabilitation for at-risk youth, as well as those aging out of the foster care system, in Georgia and New Jersey. The organization has partnerships with the Atlanta Braves, Falcons and Hawks through contracts with Delaware North and Levy Restaurants.

Drexel University professor Vanessa Irvin Morris says, “Wahida Clark is the creator of the Thug Love Fiction genre which is a sub-genre of street lit. She is also the first street lit author to pen a series, thus establishing the trend. Wahida’s style of writing has become the template for urban literature. When you read her novels, they are so real you are convinced that you either know the characters; you want to know the characters; or you are one of the characters!”

About the Author
Dubbed the official “Queen of Street Lit,” Wahida Clark has sold over 900,000 novels, including one New York Times bestseller with Hachette Publishing and three New York Times bestsellers with Cash Money Content, the publishing arm of the iconic record label Cash Money Records (home to renowned hip-hop recording artists Drake, Lil Wayne, and Nicki Minaj). Her publishing firm, Wahida Clark Presents Publishing, currently houses 30 authors, who have published and distributed nearly 100 books. She is the vice president and business development officer of the non-profit Prodigal Sons and Daughters Redirection Services, which offers proven rehabilitation for at-risk youth, as well as those aging out of the foster care system, in Georgia and New Jersey—currently serving over 20,000 people. Clark has recently been named Director of International Business Development for Prodigal Sons & Daughters Behavioral Health and has been featured in USA Today, Essence, Ebony, Vice, and on podcasts, such as Roxanne Shante, Sway in the Morning and DJ Kay Slay, amongst many others.

About Thugs: Seven
A true page-turner, Thugs: Seven details the harrowing lives of kings of the streets and the queens who love them. It’s a thriller that leaves readers at the edge of their seats as they journey through business deals gone wrong, mental health and PTSD issues, camaraderie, betrayal, unbreakable marriages, hot sex, soulmates, child birth and love triangles—all set against the backdrop of the inner dealings of the Chinese mafia and a Mexican drug cartel. The story details the harsh truths and realities of choosing a life that puts the people you love the most in harm’s way. The main characters travel from New York, New Jersey and Atlanta to Beijing and Shanghai—and no matter the circumstances, they remain fiercely protective of their loved ones.