David T. Friendly has signed on as an executive producer for a new prequel-style series called Hoop Life. The series is developed by E'Ian West and Spencer Paysinger (All American). 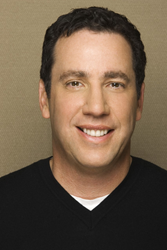 "As a Knicks fan, I certainly remembered Eddy Curry. But I never knew his incredible life journey. The idea of telling the true story of a 7-foot-tall kid who transitions straight into a world of men in the NBA, fascinated me. I don't think I've ever seen a series about anything like this and as a v

Set in Chicago’s gritty, raw, South Side; Hoop Life is centered around former lottery pick and NBA star Eddy Curry. The series showcases the wild ride that took Curry from high school phenom to NBA Champion, and his wayward group of friends that helped shape him.

"As a Knicks fan, I certainly remembered Eddy Curry. But I never knew his incredible life journey. The idea of telling the true story of a 7-foot-tall kid who transitions straight into a world of men in the NBA, fascinated me. I don't think I've ever seen a series about anything like this and as a viewer, and a producer, I cannot wait to see this show." --David T. Friendly

David T. Friendly produced best-picture nominee "Little Miss Sunshine." He also acquired the rights and serves as E.P. on "Queen of the South," now in its fifth season on Netflix and USA.

“When E'Ian called and told me he and Spencer Paysinger of ‘All American’ wanted to do a scripted series about my life, I was in awe. All I could say to that was yes, and for me and my family it was beyond exciting. To then find out David T. Friendly was joining the team, the man behind one of my favorite shows ‘Queen of the South,’ I really didn't know what to say. I guess the best way to explain the feeling was surreal. These guys truly believe we have something really special and I’m all in, 100%.” --Eddy Curry

“Eddy has a multifaceted story that kids across America can relate to. In the same breath, I can also say by the time he graduated high school, he had the responsibility of an adult. His story will show how coaches, agents, and women tried to attach themselves to the young NBA prospect. This all while dealing with normal teenage development like self-esteem and body image issues, underage sex, social drinking, and recreational drugs among peers. I think it's impressive he was able to live his dream and overcome many pitfalls along the way. We look forward to giving viewers his most authentic story.” --E'Ian West

E’Ian West is the founder of Montage Media Production Company, based in Los Angeles. The seasoned team of production professionals utilize a globally diverse reach with an ever-evolving commitment to creative content.

“Stories centered around athletes and the unique routes they take to reach their dreams will always be close to my heart. For too long Eddy’s life has been under a microscope yet few have seen what Eddy endured to be considered among the best prospects in the country. That’s why I’m thrilled to help share Eddy Curry's story with the world.” --Spencer Paysinger

Spencer Paysinger's life and career is the inspiration for the 2018 CW series, "All American." Spencer, a Super Bowl champion linebacker, has since retired from the NFL and serves as a leader in his community, a producer, and entrepreneur.