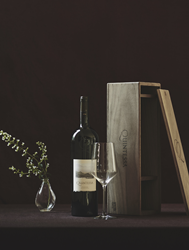 The resulting wine is a time capsule, and over the decade that this wine has transformed in the bottle, it clearly demonstrates that the evolution is not only real but also special and unique.

Quintessa is honored to announce its inaugural Decade Release, a library release that consists of a limited number of bottles of 2010 Quintessa set aside to evolve for one decade in the caves where it originated. First made exclusively available to Quintessa Vineyard Circle members in 3-packs of 750ml bottles and in 1.5 L (magnum) bottles, the Quintessa Decade Release is now available in highly limited quantities in the wholesale market.

Convinced that Quintessa had all the quality elements as an estate to be a true Napa Valley classic, the only thing missing was an understanding of the wine's capacity to age and improve with time. So in the summer of 2012, shortly after bottling the 2010 vintage, proprietors Agustin and Valeria Huneeus decided to set aside a limited number of bottles of the 2010 vintage to rest undisturbed in perfect conditions without leaving the estate.

“Wine has the capacity to reflect a place like no other, as grapes have the singularity of being fully connected to where the vines grow, including the soil, geology and the unique climatic conditions of that particular vintage,” said Estate Director Rodrigo Soto. “The resulting wine is a time capsule, and over the decade that this wine has transformed in the bottle, it clearly demonstrates that the evolution is not only real but also special and unique.”

The 2010 vintage is evidence of this incredible transformation, with black bright cherry and floral layers to dried herbs, anise & violets. From a supple silky texture to integrated layers of spice, followed by a long mineral finish. Having the time to age wine in the bottle brings balance and multiple dimensions to the glass, making the pleasure of drinking wine a completely different experience.

At twenty years old in 2010, Quintessa’s biodynamic and organically farmed vines had the knowledge to work with mother nature and thrive through the seasons. Beginning on October 5th, the fruit from the Quintessa property was harvested with patience and precision to create a wine of elegance and balance, worthy of the first Decade Release.

About Quintessa - http://www.quintessa.com
Quintessa is a world-class wine estate in the heart of Rutherford, Napa Valley. Inspired by the old-world Estate model, Quintessa crafts a single wine each year that expresses the Estate’s diversity and transforms the soil, vines, climate and energy into something greater than those individual elements. In order to capture the purest expression of place, Quintessa has practiced organic techniques since its founding in 1989 and transitioned to biodynamic practices in 1996.

When founders Agustin and Valeria Huneeus first set foot on the pristine, uncultivated property, they believed they had found something absolutely unique from what they had seen in Napa before. They knew that the land, spread over five hillsides, with different soil types and exposures, encompassed tremendous diversity that would lead Quintessa to become a world-class wine estate akin to the first growths of the Old World. Today, the Estate is planted to Cabernet Sauvignon, Merlot, Cabernet Franc, Petit Verdot and Carménère on 26 vineyard blocks. Since its first vintage in 1994, Quintessa has quickly become globally recognized as a benchmark of the Napa Valley.