“Abbadona” from Christian Faith Publishing author R. A. Simons is a chilling novel of mysteries and terror where one man stumbles upon an out-of-the-ordinary encounter. 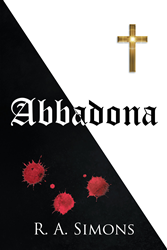 “Abbadona”: a riveting fiction that follows Dana as he finds himself in a mysterious discovery inside a mansion filled with unopened secrets. “Abbadona” is the creation of published author R. A. Simons, a writer who has a lifelong seeking that spills over into her fantasy writings.

Simons shares, “Dana Williams felt it was not his fault that his life was a failure. He saw the world as being against him for no reason he could comprehend. He had tried becoming a priest in the Episcopal Church, tried marriage and children. It’s always easier to run than to face the disappointments when things went badly. Even preparing for a hunting trip in the Rocky Mountains with his teenage children left him lost in the wilderness. But when he stumbles into an ancient mansion that hold an even more ancient terror, he finds he can no longer simply run away. Forced to stay near the horror of an unusual vampire, he comes to realize that such fiends do exist. However, this one does not fit the usual fantasies. As they struggle to understand each other and the fate that has forced them together, they begin to find a path that gives both of them hope for their futures.”

Published by Christian Faith Publishing, R. A. Simons’s new book is an interesting read filled with the haunting magic of the supernatural as the protagonists trek a journey towards their destinies.

Consumers can purchase “Abbadona” at traditional brick & mortar bookstores, or online at Amazon.com, Apple iTunes store, or Barnes and Noble.

For additional information or inquiries about “Abbadona,” contact the Christian Faith Publishing media department at 866-554-0919.