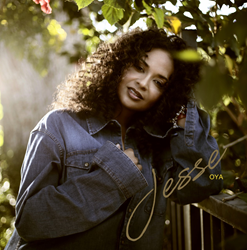 Now more than ever, we need to talk about mental health and suicide prevention.

Oya Thomas, the R&B/soul singer and author behind “Spirit of Oya” has released a new music video and re-recording of the stirring ballad “Jesse” by songwriter Janice Ian, in honor of National Suicide Prevention Week. “Jesse” is the first single from Oya’s next album “My Father’s Star” which features a curated list of both covers and original music by Oya, centered on the theme of mental health awareness, suicide prevention, and recovery. From Sept. 6-12, National Suicide Prevention Week is an annual campaign in the U.S. to inform and engage the public about suicide prevention and warning signs of suicide. Beyond this period, Oya will continue her advocacy for mental health awareness through a series of related projects.

The cause hits particularly close to home for Oya, a motivational speaker and author of “The 5 Star Points for Success,” an award-winning guide on how to manifest dreams and live one’s purpose. Speaking to thousands of students and adult clients throughout her career, Oya was moved by myriad stories told of battling depression and thoughts of suicide, shocking sentiments shared by both top-level CEOs down to the youngest of teenagers.

“Now more than ever, we need to talk about mental health and suicide prevention,” noted Oya. “We already had a growing national problem, but the pandemic is having a deeply profound effect on everyone’s mental health. I wanted to do more than coach and motivate through my speaking engagements. Since my last album, I’ve been focused on speaking, singing, and performing at live events. I wanted the next music I recorded to be even more meaningful and reach more people with a message of hope.”

Oya’s recording of “Jesse,” a song made known by Roberta Flack in 1973, is the first single off Oya’s upcoming album “My Father’s Star.” She recorded the new album to reach a wider audience and help kick off another project under her “Spirit of Oya” brand – a documentary series on suicide prevention called “Perfect, Polished and Hurting.” In it, Oya interviews personalities from throughout her career, in a collection of vignettes about finding success after struggling with suicide. The documentary is a community service project by “Spirit of Oya” and created in memory of saxophonist Zane Musa, who died by suicide in 2015. Musa was one of Oya’s favorite artists to perform together.

“The statistics and stories on suicide attempts are overwhelming, but there are also stories of survivors and lessons that could help many people find hope,” said Oya. “I want there to be greater awareness of both the growing problem and the potential alternatives. There are ways to cope and overcome this – real, tangible ways to help anyone who is struggling with depression or thoughts of suicide.”

The National Suicide Prevention Lifeline is 1-800-273-TALK (8255) for free, confidential support. More about Oya and “Spirit of Oya” projects may be found at http://spiritofoya.com. The music video and single release of “Jesse” is available at YouTube, iTunes, and all major music platforms. Follow Oya on Twitter, Instagram or Facebook.
###

ABOUT OYA
Oya Thomas is a renowned singer, speaker and “soul centered strategist” who engages the minds of her clients at the heart and soul. The award-winning entertainer, activist and author behind “The 5 Star Points for Success: Manifest Your Dreams, Live Your Life’s Purpose,” Oya has helped many achieve success and create positive change in their personal and professional lives as well as their communities. A talented vocalist, she has been singing and performing all her life, sharing the stage with David Foster, Brian McKnight, and Eric Benet, and has published books and guides on the development of the self and the soul. Her debut album “Spirit of Oya” is a compilation of R&B/soul and contemporary favorites and original songs. Her second album “My Father’s Star” is currently in development. Oya earned her bachelor’s degree in psychology at Loyola Marymount University and her master’s degree in spiritual psychology at the University of Santa Monica. Through her performances, motivational speeches, master classes, and more, Oya has empowered many. Her mantra, “Don’t let anyone or anything dim your light – including yourself! Now, go out and shine like the STAR you are!” More about Oya and “Spirit of Oya” projects may be found at http://spiritofoya.com.