New taproom also on the way with groundbreaking later this year 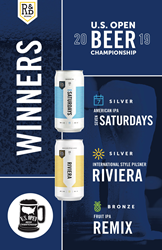 R&D's Seven Saturdays, Riviera, and Remix were big winners at the US Open Beer Championship.

R&D Brewing claimed three medals this month at the 2019 U.S. Open Beer Championship, an international brewing competition that judges more beer styles than any other in the world. Breweries from Russia to Rhode Island submitted over 7,000 beers representing over 130 different styles with judges from England, Canada, and the United States.

R&D Brewing, which only launched in 2017, earned the following honors:

“For R&D, a new brewery, to earn three medals at one of the world’s premier beer competitions is a particularly humbling honor. The wins clearly indicate we’re scaling our business with both quality and growth as top priorities,” says Director of Marketing, Rachel Peterson. “This is a great start -- but only a start! As encouraged as we are about the wins and what they mean for our approach, we’re even more excited for what’s coming in 2020.”

BREWING UP INNOVATION AND BIG PLANS

Now based in downtown Raleigh, R&D’s plans for 2020 include opening a 30 bbl production brewery and taproom. The sleek new facility will be located across from R&D’s current location at 1323 Capital Blvd. R&D expects to break ground later this year.

The company’s initials stand for Research and Development, signaling its intentional approach to developing high quality beers as part of a highly scalable business model. Last year, R&D opened a freshly constructed 3.5 bbl pilot brewing system to research, develop and invite feedback from beer enthusiasts in the North Carolina community that is directly used in the formulation and ideation around new and existing beers.

With R&D’s three 2019 honors, Brewmaster Ian VanGundy, named to All About Beer’s 30 under 30 list in 2013, has collected 19 international and national medals. In 2008, VanGundy graduated from the acclaimed Siebel Institute of Technology in Chicago with an International Diploma in Brewing Technology.

R&D’s leadership team boasts more than 120 years of combined experience in the beer industry. The company currently employs 17 and plans to grow.

The U.S. Open was created by former Friends Brewing owner and brewmaster, Dow Scoggins in 2009.