R.K. Donne’s newly released “Kingdom of the Gogs” holds the great adventures of a young boy who encounters mystery, magic, and challenges

“Kingdom of the Gogs” from Christian Faith Publishing author R.K. Donne is a fascinating fiction that follows Brodie on an exciting journey where he finds himself taking on big challenges with his newfound friends Grub and Kol. 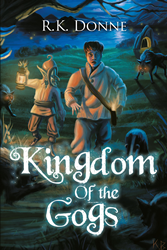 “Kingdom of the Gogs”: a wonderful tale of the strange and magical as Brodie, together with his friends, protects a dragon scale from the evil Dayton. “Kingdom of the Gogs” is the creation of published author R.K. Donne, a brilliant writer and a parent of three magical children.

Donne shares, “Kingdom of the Gogs is the first book in a series about a young boy named Brodie, who is on the autism spectrum and feels outcasted and very different. He travels to Wales—the birth country of his mother, Katrin. Brodie’s curiosity leads him on a magical journey that forever changes the small boy. He faces many mysterious and challenging tasks with the help from Grub, a grouchy changeling, and Kol, a mischievous Welsh mining goblin.
“The three set out to prevent a power-hungry wizard named Dayton from attaining a magical dragon scale that lands in Brodie’s possession. The secret of the dragon scale gives Brodie the power to transform, but is it really the scale’s magic that enables this valiant child to outmaneuver Dayton and his evil henchmen, or has something awoken deep within him?
“Skipping through realms and history and encountering witches, fairies, and other enchanted and frightening characters, Brodie soon discovers that it is not the dragon’s magic he must protect from Dayton but his own.”
Published by Christian Faith Publishing, R.K. Donne’s new book brings the readers, young and old, on an extraordinary exploration into realms filled with things and creatures beyond the natural world. This novel surely is a must-read for an extranormal and wondrous experience.
View a synopsis of “Kingdom of the Gogs” on YouTube.

Consumers can purchase “Kingdom of the Gogs” at traditional brick & mortar bookstores, or online at Amazon.com, Apple iTunes store, or Barnes and Noble.

For additional information or inquiries about “Kingdom of the Gogs,” contact the Christian Faith Publishing media department at 866-554-0919.