R.K. Sparks’s newly released “The Armies of Gog” is a gripping novel that looks closer at one man’s wars in a world filled with mess and chaos

“The Armies of Gog” from Christian Faith Publishing author R.K. Sparks is a riveting story that follows Eli, a promising spy for the NSA who can assume a variety of aliases, 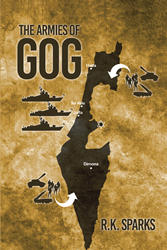 “The Armies of Gog”: a brilliant narrative that chronicles the adventure-mission of a Jewish-Palestinian spy in an ever-changing dysfunctional world that lacks of faith. “The Armies of Gog” is the creation of published author R.K. Sparks, a brilliant writer who creates exciting stories of fun, interest, and thrill.

Sparks shares, “Eli Grollenberg is a chameleon—a half-Jewish, half-Palestinian spy for the NSA. His ethnic flexibility, looks and build, fluency in nine languages, and technological genius makes him one of America’s greatest assets. Simply put, he can assume any one of twenty-three unique aliases, which include three women, and be dropped into nearly twenty countries virtually unnoticed.

“Following the election of Donald J. Trump in 2016, things became interesting around the world from an NSA perspective. The only thing more interesting than the brewing civil war in America was the coalition of countries assembling to come against Israel. While nothing new, this group was unique in that it included Russia and a sinister motive that could potentially change the world and fulfill hundreds of Bible prophecies.

“In a world of uncertainty and potential nuclear war, Eli delivers a message of hope from the front lines.”
Published by Christian Faith Publishing, R.K. Sparks’s new book is an interesting fiction that accounts the life of an NSA spy and the mess of a world he’s tasked to work onto. Eli reaches out to everyone with a wish to inspire them with hope.

View a synopsis of “The Armies of Gog” on YouTube.

Consumers can purchase “The Armies of Gog” at traditional brick & mortar bookstores, or online at Amazon.com, Apple iTunes store, or Barnes and Noble.

For additional information or inquiries about “The Armies of Gog,” contact the Christian Faith Publishing media department at 866-554-0919.