Rachael Sage Premieres Collaborative "Home (Where I Am Now)" Video

As premiered by M Music & Musicians Magazine (US) and Lock Magazine (UK), MPress Records recording artist Rachael Sage has released a new uplifting video, "Home (Where I Am Now)", which is sure to resonate throughout the holiday season and beyond. 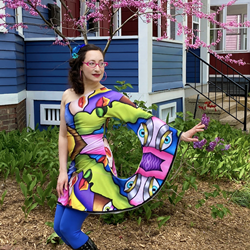 As premiered by M Music & Musicians Magazine (US) and Lock Magazine(UK), MPress Records recording artist Rachael Sage has released a new uplifting video, "Home (Where I Am Now)", which is sure to resonate throughout the holiday season and beyond. The song "Home (Where I Am Now)" was co-written with Irish singer-songwriter Fiona Harte, and originally appeared on Sage's 2016 album, Choreographic.

Co-directed by Sage and Meredith Tarr (who also edited), the concept for the new video evolved after Rachael wanted to create an uplifting video to show how people have had to redefine what "home" means since the Covid-19 lockdown. She invited her fans and friends to send in homemade clips showing what they were doing to keep active and connected, and received an array of submissions from both sides of the Atlantic, including clips from Brady Farrar of Dance Moms, author/LGBTQ activist Desmond Is Amazing, professional dancers Kaci King, Destiny Wimpye, and Kim Manning, and cameos from her band The Sequins (Kelly Halloran, Andy Mac, and Ward Williams).

Sage explains: "Part of the reason I wanted to make this video was because – like so many people – I was feeling overwhelmed and unsettled at the start of lockdown this past Spring. I conceived this video as a way to encourage everyone to share what they were doing to stay creative and connected and to help illuminate what it truly means to be "Home", both physically, but also the idea of being expressive and at home in one's skin. I was absolutely blown away by the variety of heartfelt submissions we received! Every person who contributed is a beautiful, inspiring performer (and even a few limelight-seeking pets got involved). I hope watching the video uplifts everyone, just in time for the holidays!"

Rachael Sage continues her weekly "Stay In With Sage" livestream series every Sunday in December at 6pm Eastern, featuring a Special Hanukkah Edition. All shows this month will benefit CityMeals On Wheels.

About Rachael Sage: Since founding her own label MPress Records two decades ago, NYC-based alt-pop artist and multi-instrumentalist Rachael Sage has steadily released 14 albums of vibrant, dynamic music with poetic, image-rich lyrics spanning subjects as wide as her inspirations. Often designing her own album artwork, costumes and musical instruments, Sage has toured with an eclectic list of artists including Ani DiFranco, Beth Hart, Sarah McLachlan, Judy Collins and Howard Jones. Raised mainly on classical music, doo-wop, '70s folk and British pop, Sage possesses a rare combination of musical ingenuity, visual dynamism and emotional insight. Her songs are cinematic and beautiful, and her production layered, lush and laced with orchestral surprises.

Suggested Post:
NEW: @rachaelsage & an amazing group of friends & supporters have created a heartfelt, uplifting video for her song "Home (Where I Am Now)", highlighting what people have been doing while staying safe at home these past few months. Watch it now at bit.ly/2020HomeVideo