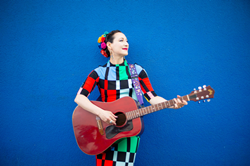 As premiered by PopMatters (US) and Music News (UK), Rachael Sage has released a new video to accompany her Top 40 charting single, "Blue Sky Days" from her album Character. Originally composed as a meditation on gratitude in the midst of her own cancer recovery, Sage’s song has taken on new resonance during Covid-19. Every week since lockdown, Rachael has been performing "Blue Sky Days" online via her Facebook Livestream sessions “Stay In With Sage” (benefiting New York-based charities), where listeners from all over the world have expressed how much the lyrics’ uplifting imagery has been helping them stay positive and hopeful.

The video, directed by award-winning cinematographer Michael Flanagan and produced by longtime collaborator Nick Clark, features 10-year-old figure skater Morgan Sage (no relation), and was filmed at the historic Evarts Rink in Katonah, NY as well as Carriage House Studios in Stamford, CT. The captivating clip was conceived and art-directed by Rachael, who has been a passionate lifelong fan of figure-skating. Combining graceful, expansive movements on the ice with the warm intimacy of a solo piano performance, the video supplies an artistic antidote to the global condition of "sheltering in place".

Rachael explains, "As a survivor, it was important to pair this song with imagery that exemplified the freedom that comes from regaining control not only of one's physical body, but over one's spirit as well. When I saw Morgan skate, her sheer joy and pure expressiveness immediately reminded me of what I was feeling when I played my first show after my recovery. The song is essentially about hope, as well as a particular kind of gratitude that is much stronger because it is grounded in mindfulness. Now more than ever, we all can agree that health, loved-ones and the beauty of nature are precious beyond measure... and that eventually, the clouds do clear."

ABOUT RACHAEL SAGE
Since founding her own label MPress Records two decades ago, NYC-based alt-pop artist and multi-instrumentalist Rachael Sage has steadily released 14 albums of vibrant, dynamic music with poetic, image-rich lyrics spanning subjects as wide as her inspirations. Often designing her own album artwork, costumes and musical instruments, Sage has toured with an eclectic list of artists including Ani DiFranco, Beth Hart, Sarah McLachlan, Judy Collins and Howard Jones. Raised mainly on classical music, doo-wop, '70s folk and British pop, Sage possesses a rare combination of musical ingenuity, visual dynamism and emotional insight. Her songs are cinematic and beautiful, and her production layered, lush and laced with orchestral surprises.

Sage's new album Character is a song cycle written as the beloved indie artist was recovering from endometrial cancer in 2018. Throughout the revelatory 12-song collection, Sage reflects on such concepts as gratitude, compassion, authenticity and optimism, questioning what comprises character – and lifting herself up in the process.

Balancing the poetic lyricism for which she is best known with a newfound reverence for music as a healing tool, Sage is in the midst of a creative renaissance, merging her experience of survivorship with both music and activism. Character is a musical testament to the miracle and mystery of the human experience, in all its inspiring, painful and confounding glory. Currently performing 2x weekly "Stay In With Sage" Facebook Livestreams benefiting rotating NYC-based food aid charities, the former ballerina says she has "come to realize that music is the most powerful healing tool I have ever encountered. It has quite literally saved my life, and I intend for the rest of my career to be a long, slow dance of gratitude."