Rachael Sage releases a cover of the Ani DiFranco classic "Both Hands" and accompanying music video. This is the first single off forthcoming album "Character" due for release on March 6th. 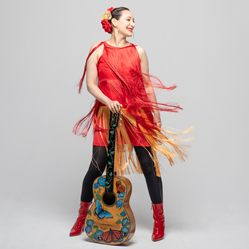 Rachael Sage has released the first single from her forthcoming album Character: a string quartet version of the classic Ani DiFranco song "Both Hands". The accompanying music video premiered on PopMatters. Sage has also just been confirmed as support on the Howard Jones Acoustic Trio's Winter 2020 US tour, beginning on January 28 in Seattle.

Sage's fresh, string-quartet take on "Both Hands" is both musically unexpected and a full-circle moment. Sage's first ever tour was as an opener for DiFranco, and she has long been inspired by her fellow indie label owner – but in this case, it was more vital. While undergoing treatment for cancer in 2018, Sage listened to "Both Hands" as part of a playlist that kept her "determined and strong". A year later, it was a natural fit for her new album Character, due out on MPress Records on March 6.

Produced by Sage and Grammy® winner Andy Zulla, the track features a string quartet performing an arrangement by cellist Dave Eggar (Evanescence, Coldplay), Sage, and Chuck Palmer. Zulla set up cameras around Carriage House Studios in Stamford, CT to capture the recording process, and edited the footage into the official music video, which has premiered exclusively on PopMatters. The single is now available on all digital platforms, including Apple Music, Amazon, and Spotify.

January will also see Sage heading back out onto the road supporting 80s music icon Howard Jones, after accepting his personal invitation to join his US Acoustic Trio tour. Beginning on January 28 at Seattle's Benaroya Recital Hall, she will support dates in cities including Los Angeles, Austin, St. Paul, New York City, and Miami.

For more information, press photos, or to receive a review copy of "Both Hands" or "Character", please contact:

ABOUT RACHAEL SAGE: Rachael Sage is a vibrant and innovative NYC based folk-pop singer/songwriter and activist who has toured with an eclectic list of artists including Howard Jones, Ani DiFranco, Judy Collins, Beth Hart, and Shawn Colvin. Her music has been dubbed "wildly expressive" by Paste Magazine and Stereo Embers described Sage as "the kind of performer you can't take your eyes off". Through her live performances and album releases, Rachael has advocated and raised funds for various charitable beneficiaries including WhyHunger, NEDA, Girls Inc., The American Refugee Committee and more, with focuses on youth homelessness, women's rights, hurricane relief and victims of gun violence. Most recently, Rachael released her charity single "Bravery's On Fire", all proceeds from which benefit Women's Cancer Research.