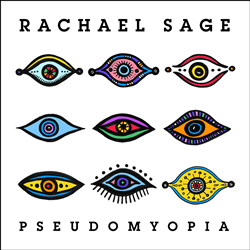 "…an entrancing collection of songs…unlike anything out there in this moment in time." - Songwriter Magazine

Singer-songwriter, multi-instrumentalist and producer Rachael Sage has released her new acoustic album "PseudoMyopia" via MPress Records/ILS/Universal and premiered the album stream with M Music & Musicians Magazine. Listen and purchase "PseudoMyopia" here. Sage will support the album with a full schedule of performances throughout the year, including an official album release launch at NYC's prestigious Joe's Pub, which is celebrating its 20th anniversary season. See below for the full list of tour dates.

A companion acoustic album to Sage’s critically acclaimed recording “Myopia”, "PseudoMyopia" is a collection of 11 songs focusing on the concept of vision – including narrow mindedness – in all its many manifestations. Legally blind without corrective lenses, Sage balances the political and the personal with a striking depth and perspective. A multi-instrumentalist herself, she enlisted a diverse cast of guest musicians to bring a warm intimacy to these very timely tracks, touching on topics as varied as government surveillance, environmental protection, and female empowerment. Co-produced by Sage and Grammy® winner Andy Zulla, guest artists include Ben Butler (Sting), bassist Richard Hammond (Joan Osborne), cellist Ward Williams (Sara Bareilles) and Grammy® nominated musician Seth Glier.

Sage will head out on the road this Spring, with stops throughout the US and UK in support of "PseudoMyopia", which is available via iTunes and all major music platforms. An album release event with Rachael and her full band, The Sequins, will be held at Joe's Pub / NYC on April 18th. If you would like to be on the VIP guest list for the release party, attend any of her shows, or request a physical CD copy of "PseudoMyopia", please contact Tiina Teal: tiina@mpressrecords.com