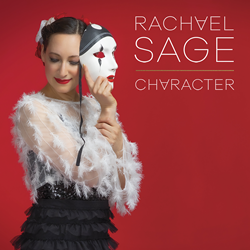 Today Rachael Sage has shared Character, her latest full album under her own label, MPress Records, and premiered by M Music and Musician Magazine. The emotional, timely, and timeless project from the multi-instrumentalist and producer came together as Sage was overcoming endometrial cancer and was forced to ask herself, “what comprises character?”.

Sage is currently on the road supporting 80s music icon Howard Jones, after accepting his personal invitation to join his US Acoustic Trio tour. The 33-date tour began in January and sees her supporting in cities that include Los Angeles, Austin, Boston, New York City, and Miami. See below for a full list of live dates.

Character is available on vinyl & deluxe 2-disc hardcover CD book on the MPress Records online store, and available to stream/download on all platforms at mpress.lnk.to/Character.

For more information, press photos, or to receive a review copy of Character, please contact:

ABOUT RACHAEL SAGE:
Since founding her own label MPress Records two decades ago, NYC-based alt-pop artist and multi-instrumentalist Rachael Sage has steadily released over a dozen albums of vibrant, dynamic music with poetic, image-rich lyrics spanning subjects as wide as her inspirations. Often designing her own album artwork, costumes and musical instruments, Sage has toured with an eclectic list of artists including Ani DiFranco, Beth Hart, Sarah McLachlan, Judy Collins and Howard Jones. Raised mainly on classical music, doo-wop, ‘70s folk and British pop, Sage possesses a rare combination of musical ingenuity, visual dynamism and emotional insight. Her songs are cinematic and beautiful, and her production layered, lush and laced with orchestral surprises.

Sage's forthcoming album Character is a song cycle written as the beloved indie artist was recovering from endometrial cancer in 2018. Throughout the revelatory 12-song collection, Sage reflects on such concepts as gratitude, compassion, authenticity and optimism, questioning what comprises character – and lifting herself up in the process.

Balancing the poetic lyricism for which she is best known with a newfound reverence for music as a healing tool, Sage is in the midst of a creative renaissance, merging her experience of survivorship with both music and activism. Character is a musical testament to the miracle and mystery of the human experience, in all its inspiring, painful and confounding glory. Sage muses: “I hope these songs honor just how resilient the human spirit can be, and remind us that sometimes ‘it’s ok to not be ok’.”

For Sage, survivorship now means balancing her new commitment to staying healthy with a renewed sense of purpose: creating work that uplifts and empowers others in any way she possibly can. Currently back out on tour with Howard Jones, the former ballerina says she has "come to realize that music is the most powerful healing tool I have ever encountered. It has quite literally saved my life, and I intend for the rest of my career to be a long, slow dance of gratitude."