Benchmark associates will live out their company’s mission to Elevate Human Connection™ in their local towns and communities. 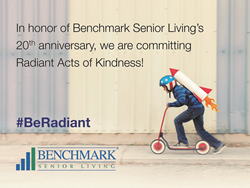 Nearly everyone has heard of “random acts of kindness,” but Benchmark Senior Living employees are taking things up a notch by committing 1000 Radiant Acts of Kindness during the month of June in the towns and neighborhoods where their 54 senior living communities are located.

If someone lives near one of the employees or near a Benchmark senior living community, they might open their front door one morning in June and find a pot of flowers or the newspaper moved closer to the front porch with a little card saying “In honor of Benchmark Senior Living’s 20th anniversary, we are committing Radiant Acts of Kindness!”

“This is Benchmark’s 20th anniversary year,” says Tom Grape, the company’s founder and CEO, “and we want to give back to the communities and families that have supported our company’s growth since 1997. So, every one of our 54 senior living communities across seven Northeast states - as well as associates in our Waltham, Mass., home office - has committed to performing at least 20 Radiant Acts of Kindness during June in their local neighborhoods and towns.”

Why "radiant" instead of "random"?

“Our Benchmark mission is to Elevate Human Connection,” Grape says. “Connecting with people and putting them at the center of everything we do is what has set Benchmark apart for 20 years. Our 1000 acts won’t be random. They will be conscientious efforts to radiate kindness and make people feel good. They may even help restore belief in the goodness of those around them.”

ABOUT BENCHMARK SENIOR LIVING
Based in Waltham, Mass., Benchmark Senior Living is the leading provider of senior living services in the Northeast. Founded in 1997 by Tom Grape and celebrating its 20th anniversary in 2017, Benchmark operates 54 senior living communities, offering independent living, assisted living, memory care, rehabilitation services and skilled nursing in Connecticut, Maine, Massachusetts, New Hampshire, Pennsylvania, Rhode Island and Vermont. It will open its first New York community, Whisper Woods at Smithtown, in 2018. Benchmark has been recognized by The Boston Globe for the last nine years as one of the Top 100 Places to work, and by the Boston Business Journal six times, including 2017, as one of the Best Places to Work and four times as one of the Healthiest Employers. Visit Benchmark at BenchmarkSeniorLiving.com.

Benchmark Senior Living is celebrating its 20th anniversary in 2017.Benchmark's mission is to Elevate Human Connection in all interactions with residents, their families and its own associates.