Astronomer is recognized for his leadership and vision in the development of the Large Millimeter Telescope which was instrumental in capturing the first image of a black hole and confirmed Einstein’s Theory of General Relativity. 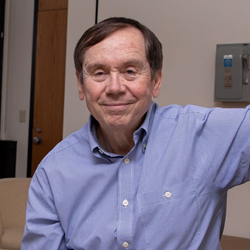 “ARCS Foundation means a great deal to me because they supported me during my graduate education. The support of young scientists is very important to the advancement of science in the US, and more generally, around the world.”

At the January National Board Meeting. ARCS® Foundation Inc. announced Radio Astronomer and Planetary Scientist F. Peter Schloerb PhD, has been selected as the 2021 inductee into the prestigious ARCS Alumni Hall of Fame.

Hall of Fame Inductees are ARCS Scholar Alumni who have made outstanding contributions to the advancement of science and increased our nation’s scientific competitiveness. Selection is by a panel comprised of ARCS Foundation national board members and advisors and is based on alumni contributions in the areas of scientific innovation, discovery, economic impact, development of future scientists, and enhancement of US scientific superiority.

Dr. Schloerb is the University of Massachusetts (UMass) Director of the Large Millimeter Telescope (LMT) Alfonso Serrano, a joint project between UMass and Instituto Nacional de Astrofísica, Óptica y Electrónica in Mexico. He is also a professor and director of the Five College Radio Astronomy Observatory at UMass.

ARCS Foundation has recognized Dr. Schloerb for his leadership and vision for the concept, design, and construction of the LMT, which is a crucial component in a network of eight strategically placed telescopes around the globe known as the Event Horizon Telescope (EHT). The international collaboration, which includes hundreds of scientists in twenty countries, forms an Earth-sized virtual telescope with unprecedented sensitivity and resolution.

In April 2019, the EHT partnership, including Dr. Schloerb and the LMT, publicly revealed the first ever image of a supermassive black hole at the center of a galaxy 55 million light-years away—also marking a powerful confirmation of Albert Einstein’s theory of general relativity.

The image produced prolific honors for Dr. Schloerb and members of the EHT, including the 2020 Breakthrough Prize in Fundamental Physics.

Dr. Schloerb was an ARCS Scholar in 1977 while attending the California Institute of Technology where he received his PhD in planetary science. Upon accepting his induction into the ARCS Alumni Hall of Fame, he thanked ARCS for their encouragement in his scientific studies that culminated into the historic observations he shares with the world today.
“ARCS Foundation means a great deal to me because they supported me during my graduate education. The support of young scientists is very important to the advancement of science in the US, and more generally, around the world.”
“It is truly our pleasure to welcome Dr. F. Peter Schloerb into the distinguished ARCS Alumni Hall of Fame,” said Sherry Lundeen, national president of ARCS Foundation. “His prolific impact in US planetary space studies embodies ARCS Foundation’s historic beginnings and our mission to award outstanding scholars who will promote US competitiveness in STEM fields. We are extremely proud of Dr. Schloerb’s work, as it continues to provide significant images that will be studied for years to come.”

As a member of ARCS Alumni Hall of Fame, Dr. Schloerb joins the company of eleven other outstanding alumni who also received ARCS Foundation funding to support their education in past years.

About ARCS® Foundation: ARCS Foundation is a national nonprofit volunteer women’s organization that promotes US competitiveness by providing financial awards to academically outstanding US citizens studying to complete degrees in science, technology, engineering, mathematics (STEM), and health disciplines at 49 of the nation’s leading research universities. The organization has awarded more than $120 million to more than 10,900 scholars since 1958. ARCS Foundation Scholars have produced thousands of research publications and patents, secured billions in grant funding, started science-related companies, and played a significant role in teaching and mentoring young people in the STEM pipeline. More information is available at arcsfoundation.org.