Cigar Advisor Magazine is a digital publication dedicated to providing cigar enthusiasts with entertaining and informative content. The featured cover story of their January 2014 issue is a piece by Rafael Nodal on the Cuban Embargo and why Cuban cigars should remain illegal. 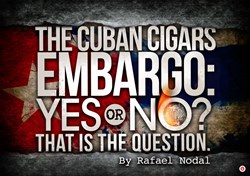 My father taught me that you don't deal with thieves; you don't do business with criminals; you don't help bullies, and you certainly don't help dictators stay in power to continue terrorizing their people.

The all-new Cigar Advisor is an online cigar magazine that brings a fresh, irreverent, and down-to-earth perspective on all things cigars to thousands of smokers. In addition to educational cigar content and behind-the-scenes cigar industry articles from some of the business’s top names, Cigar Advisor delivers an array of content about a variety of topics of interest to people who enjoy the cigar lifestyle. The magazine also features cigar reviews and ratings submitted by real smokers, and much more. Cigar Advisor Magazine has published a new article in this month's feature section, entitled, "The Cuban Cigars Embargo: Yes or No? That is the Question." Written by Boutique Blends founder and Cuban émigré, Rafael Nodal, readers can see both sides of the issue and decide for themselves.

"It seems like a very simple question," writes Nodal. "Do we as Americans want to be restricted by government policy to buy and 'legally' enjoy a Cuban cigar?...Americans are tired of the government telling us where to smoke, what to smoke, and when to smoke a cigar. However, as in many things in life, it is not as simple as the difference between black and white."

Nodal arrived in the United States as a young man during the Marielos Boat Lift, which took place between April 15 and October 31, 1980. For him, it is "a deeply personal and emotional issue." He has seen firsthand how the Castro regime attempts to control every aspect of the Cuban peoples' lives.

"My father taught me that you don't deal with thieves; you don't do business with criminals; you don't help bullies, and you certainly don't help dictators stay in power to continue terrorizing their people," writes Nodal. "Those principles have guided my reasoning with regard to the U.S. Cuban Trade Embargo."

Nodal also points out how Cubans who have arrived in the U.S. in more recent years tend to favor dropping the embargo. This difference of opinion between the older Cubans and the current generation of émigrés, continues to be a hot button for debate.