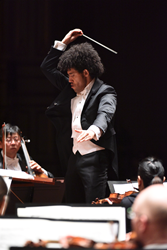 The San Diego Symphony today announced internationally acclaimed conductor and Music Director Rafael Payare will extend his contract with the organization through the 2025-26 season. Payare continues as the 13th music director in the San Diego Symphony’s 110-year history and will be in residence 10 weeks every season. Payare will feature concerts at both The Jacobs Music Center’s Copley Symphony Hall and The Shell™, as well as touring opportunities when travel is able to resume.

“As a musician Rafael Payare has the perfect balance of making the musicians feel secure and at the same time, taking necessary artistic risks to make each and every performance exciting,” said Martha Gilmer, San Diego Symphony CEO. “While he strives for the highest level of precision, he asks every musician to be their most expressive self which creates riveting, impactful and emotional performances for our musicians and our audiences. His artistry, humanity and warmth has created a strong bond with our public. With this contract extension we assure that the work of Rafael with the musicians of San Diego continues, assuring the very strong and vital future of the San Diego Symphony.”

Since being awarded first prize at the Malko Conducting Competition in 2012, Payare is celebrated as one of the most exciting conductors of his generation. In the 20-21 season alone, in addition to performances with the San Diego Symphony, Payare was scheduled to lead many of the world’s other preeminent orchestras including debuts with The Philadelphia Orchestra, San Francisco Symphony, and Orchestre National de France. He is scheduled to conduct Puccini’s La Bohème at the Staatsoper Berlin in April 2021. Other appearances scheduled for 2021 include the Philharmonia Orchestra in London with cellist Alisa Weilerstein, Orchestre Symphonique de Montreal, NDR Elbphilharmonie Orchester (Hamburg), Dresden Philharmonie and Royal Stockholm Philharmonic Orchestra.

Payare’s initial agreement with the San Diego Symphony was for a period of four years, 2018-2022. He began his role as Music Director in October 2019 with a five-week residency comprised of seven programs, including monumental performances of Mahler’s Symphony No. 5 and Mendelssohn’s A Midsummer Night’s Dream. Payare’s commitment and enthusiasm for the region was evident when he conducted San Diego Symphony’s first ever free “Concert for San Diego” on November 9 at Petco Park.

When COVID-19 forced the cancellation of the remainder of the 2019-20 season Payare travelled to San Diego to be close to the musicians, staff and the entire San Diego Symphony family. He has continued to work with the musicians in rehearsals and recordings, including a “thank you” tribute for front-line workers, an introduction by brass musicians for KPBS of the American folksong “Simple Gifts,” the San Diego Symphony’s “A Return to Music” which aired October 23. Payare initiated a series of performances on music entitled “Listen//Hear,” which is streamed on the Symphony’s website and social channels, and he is currently conducting San Diego Symphony musicians in the staged drive-in performances of Puccini’s La Bohème presented by the San Diego Opera.

“I’m excited to be extending our time together on this wonderful journey,” said Payare. “I’ve loved every moment of getting to know the orchestra more deeply and growing together. I look forward to keeping the momentum of the past few years going and taking the audience with us on this musical voyage, which will include exploring repertoire and doing things on different scales and in different ways. It will provide the audience new opportunities to know the orchestra in greater detail. And when we are able, I can’t wait to continue working with schools and youth orchestras in San Diego and in Mexico, to build partnerships and create moments to share the stage together.”

“On behalf of the Board, we could not be happier with Rafael Payare’s leadership of our ensemble. We are heartened by Rafael’s embrace of the San Diego community and the warm welcome he has received from our growing audience. Rafael’s international experience and profile have attracted new attention for our orchestra from diverse audiences, and he has been steadfast in his presence and support of the musicians,” said Dave Snyder, San Diego Symphony Orchestra Board Chair.

“The news of Rafael's contract extension is exciting and uplifting for the musicians of the orchestra,” said Rose Lombardo, Principal Flute of the San Diego Symphony and member of the Orchestra’s Artistic Advisory Committee. “Rafael's opening season was filled with remarkable momentum, and there has been wonderfully positive and enthusiastic feedback from the musicians and the community here in San Diego. We are very much looking forward to continuing our work together, expanding our artistic voice, and experiencing the growth of our relationship over his tenure as Music Director.”