The forthcoming compilation “Conversation in Key” is slated for release on August 30th by renowned label Ghetto Youths International, and will be available on all major streaming platforms and digital outlets. 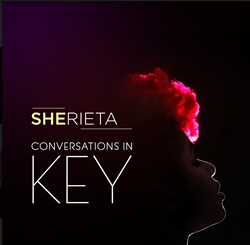 From the halls of the prestigious Edna Manley College to the international forefront working with such icons as the legendary Marcia Griffiths, GRAMMY winning artists Damian "Jr Gong" Marley and Beenie Man as well as penning lyrics for GRAMMY nominated Etana among many others, Sherieta’s path is predestined for greatness.

The soulful singer-songwriter who describes her sound as "Exotique-Soul", (a term coined to exemplify her unrestrained female energy and strength, expressed through soul music, fused with Jamaican flavour) is now gearing up for her spotlight with her forthcoming compilation “Conversation in Key”.

The project embodies the essence of her soul laid out to perfectly crafted musical notes. As a creative, passionate and temperamental soul, the latter runs the spectrum of life. "My songs are predominantly about perspectives, telling the story from the other side. The musical style depends on whatever it is I intend to relay through the song- I’ll try anything, and mix it with Jamaican flavour, of course." the young artist explains.

Written and co-produced by Sherieta herself, “Conversation in Key” delivers 7 tracks each displaying her vocal abilities and prolific lyrics. "Don't Fail Me Now", "Conversation", "One Talent", "Sometimes" and "Hey", and on two of her masterpieces, she is joined by fellow talented artists; "Can We Stay" featuring Chevaughn, and Woman2Woman with Raquel Jones. Both songs were co-written by the artists themselves, and bring a welcome flavor to the EP.

Savoring a taste of international spotlight by making the top 20 list on the BBC’s international talent competition, ‘The Next Big Thing’ with an original song, Sherieta’s ultimate desire is to give the world a catalog of excellent music that will stand the test of time.

“Conversation in Key” is slated for release on August 30th by renowned label Ghetto Youths International, and will be available on all major streaming platforms and digital outlets.