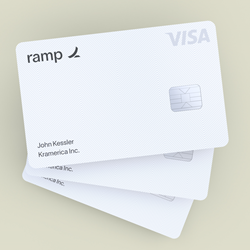 The news follows the appointment of Srinath Srinivasan as Head of Risk at Ramp last month. Srinivasan previously worked at Goldman Sachs and was deeply involved with developing credit underwriting for the Apple Card. Earlier this year, Nik Koblov also joined Ramp to lead Risk and Underwriting Engineering. Before joining Ramp, Koblov served as the VP of Engineering at Affirm and as a Vice President in Credit Technology at Goldman Sachs.

“We are thrilled to work with Goldman Sachs for our first debt capital facility," said Eric Glyman, CEO, Ramp. “The funding from Goldman Sachs will allow us to accelerate our rapid growth and serve more customers as America’s fastest growing corporate card and spend management platform.”

Based on industry analysis, Ramp is the fastest corporate card company in history to reach $100M in transaction volume, and grew monthly transaction volume significantly year over year -- with meaningful acceleration towards the end of 2020. While technology startups were early adopters of Ramp, today the company works with a wide array of industries spanning healthcare, construction, nonprofit, retail, agriculture, and legal services. In less than a year, Ramp saved customers more than ten million dollars through its proprietary software that identifies ways for businesses to spend less on its vendors, 1.5% cash back on all purchases, accounting automation, and deep vendor discounts.

Last month, Ramp launched an advanced expense management platform that allows companies to automate policies and approvals with machine learning, while employees can track and organize all purchases, including transactions not made with a Ramp card. Since its launch, over 30% of Ramp customers have cancelled existing third party expense management subscriptions and have recognized further savings in doing so.

“Eight Sleep previously relied on American Express for its corporate card and Expensify as our expense management system,” said CEO, Matteo Franceschetti, Eight Sleep. “Ramp was a complete game changer. It’s a single platform that can handle every aspect of our spending - including things that aren’t paid for with a card. This has led to immense savings - both in terms of dollars and time for our finance team. Given our success with the product so far, it’s no surprise to see the company is growing the way it is.”

Ramp publicly launched in February 2020 and has raised over $200 million in debt and equity capital. Investors in Ramp include Founders Fund, Coatue Management, D1 Capital, and over 50 CEOs and finance leaders from leading companies like Warby Parker, Twitch, Away, Opendoor, Plaid, Rent the Runway, and more.