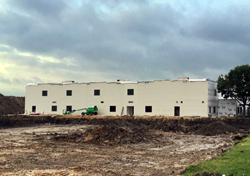 Design-build construction firm Ramtech Building Systems of Mansfield, Texas has announced that the company is moving into the final phase of construction on the new high school facility for the Randolph Field (TX) Independent School District. The design-build contract called for Ramtech to provide complete turnkey services to the district using the company's Accelerated Building System (ABS) prefabricated construction method for a 47,448 square foot two-story facility. The metal portion of the exterior finish application is now 75% complete and the masonry portion will begin next week. The interior finishes have been applied and the floor coverings are also slated to be installed beginning next week. To make way for the new $7.3 million school building, the school district demolished two existing structures which were removed during the spring of last year. The design of the new structure provides space for 23 classrooms, an eighth grade science center, two computer labs, two student commons, and an administrative area with offices, counseling suite, and a nurse station. The facility will also include four high school level labs for physics, biology, chemistry, and environmental science all situated around a common central preparation area with chemical storage capability. In addition to brick and split-faced block masonry on the first floor, the building's exterior design includes a high profile custom-colored architectural metal siding in horizontal and vertical orientations designed to highlight the building entrances and complement the finishes of the existing campus structures. High-efficiency gas-fired rooftop HVAC units will provide the heating and cooling on the second floor of the building, with zoned electrical HVAC units for the first floor. Ramtech expects to complete the project by July 1, and once the building is operational, the District plans to demolish their current high school facility.

The Randolph Field ISD serves the children of military personnel at Randolph Air Force Base, part of the Joint Base San Antonio System. Founded in 1933, the school district is one of only three in Texas whose boundaries fall entirely within a military installation. To facilitate the planned expansion, the school chose to replace the current high school with a new two-story facility adjacent to the existing high school and middle school. Prior to awarding the design-build contract to Ramtech, the school district worked with Gallagher Construction to develop the district's master plan and to facilitate the RFP and contract negotiations for the prefabricated building project.

About Ramtech and the Accelerated Building System

Since 1982 Ramtech Building Systems has been providing innovative permanent modular buildings for educational institutions, government agencies, healthcare providers, and Fortune 500 companies throughout the Southern United States. As a design-build construction company, Ramtech offers full in-house design, a manufacturer direct product, and complete site construction services all within a single-source solution. Ramtech's ABS process combines the best of off-site prefabrication and on-site construction techniques in order to produce a building faster and with less cost but identical in the look, functionality and life expectancy of a completely site-built structure. Ramtech accomplishes this by setting factory assembled modular sections complete with attached ceilings and walls - but no floors - directly onto a conventional concrete slab foundation. This allows the concrete slab to become the floor of the structure just like a site-built building. All of the exterior and interior finishes are then site-applied, enabling Ramtech to provide their clients with a new facility faster and with less design and construction costs, while still having the same aesthetic choices and curb appeal as a completely site-built structure. To learn more about Ramtech Building Systems and the Accelerated Building System process, visit the company's website at RamtechEducation.com.