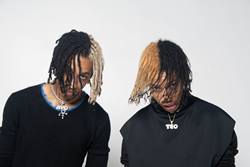 My brother is my best friend. If a female texts me and tells me to bring a friend, who else would I bring?

Platinum recording artists and viral dance dynamos Ayo & Teo announced the release of their highly anticipated new record, “Bring A Friend”. The record drops at midnight, August 28, 2020, and is released in partnership with ShoNuff Digital Media and BMG America. Produced by music maven Matt Maalouf, the song is the first release off a four-song EP.

Fresh off the viral hit, “Rolex”, which received over 2.5 billion streams, Ayo & Teo demonstrate the breadth of their artistry. A departure from previous high-energy and dance-inspired records, “Bring A Friend” grooves and vibes. Catchy hooks and a melodic rap reflect real-life situations while highlighting the bonds of brotherhood. “My brother is my best friend. If a female texts me and tells me to bring a friend, who else would I bring”, laughed Teo. “He better take me”, said Ayo.

While bringing a friend may be a theme for Teo’s 21st birthday party, the song itself is reason enough to celebrate. “We’re not only celebrating my bro’s birthday but also our maturing as artists. This record is the birth of our new musical creation. Check it out”, chimed Ayo.