THCV - not to be confused with THC - is believed to act as a stimulant and appetite suppressant. THCV tinctures are now available to purchase online and in stores. 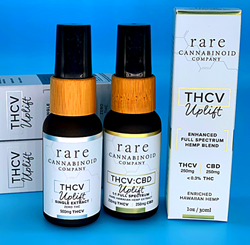 THCV – not to be confused with THC (tetrahydrocannabinol: the psychoactive component in cannabis and hemp) – is an extremely rare cannabinoid that is believed to act as a stimulant and appetite suppressant. It is also being studied for use as an antipsychotic and in the treatment of Alzheimer’s, type 2 diabetes and for bone growth.

Often referred to as the “sports car of cannabinoids” and lauded for its possible potential to help people lose weight, THCV has been widely sought after for decades.

Like CBD and THC, “rare” or “minor” cannabinoids each offer health and wellness benefits and are found in hemp and cannabis plants. However, they naturally occur in much smaller quantities than CBD or THC. THCV has been especially difficult to find and isolate. In fact, just a few years ago, strain hunters traversed the Democratic Republic of Congo by dug-out canoe in search of African landrace cannabis plants high in THCV. However, even those plants only contained 1% THCV. (Learn more about the hunt for THCV here.)

Now, thanks to genetic, scientific and technological advances, Rare Cannabinoid Company is able to make pure THCV tinctures for the first time.

“Rare Cannabinoid Company is extremely excited to be the first to offer THCV on its own,” said Jared Dalgamouni, founder of the brand and its sister company Hawaiian Choice.

“People can now experience this energizing, appetite suppressing cannabinoid in a clear, measured way,” he said.

The announcement comes as Rare Cannabinoid Company was featured in an article on Leafly, the world's largest cannabis website.

There are two types of tinctures: a pure THCV single extract and a one-to-one THCV plus CBD blend.

Cannabinoids tend to work best when taken together. There is something called the “entourage effect,” which means that when consumed in unison, cannabinoids amplify each other and become more than the sum of their individual parts. For this reason, the single extract is flavorless for seamless blending with other full or broad spectrum CBD or THC oils. Meanwhile, the blend is a great option for people who want a complete cannabinoid supplement straight off the shelf.

Third party lab reports can be found on the company’s web site for full peace of mind that each tincture contains what it is supposed to and nothing else.

Research into rare cannabinoids is ongoing, but they are believed to offer the following benefits:

CBN: may act as a sedative assisting with relaxation and sleep and may also be taken for pain.

CBG: has anti-bacterial properties and at least one study showed effectiveness against superbug MRSA. It may also assist with reducing inflammation and studies on CBG show promise in fighting cancer.

Research into rare cannabinoids is growing rapidly and more and more are being isolated and made available to the public. In fact, Rare Cannabinoid Company was started by Hawaii’s most popular CBD brand, Hawaiian Choice, in response to customers’ desire to try these promising compounds.

“Each of these rare cannabinoids is believed to offer a different physical or mental benefit. So, people can mix and match them according to their needs,” said Dalgamouni.

Rare Cannabinoid Company is currently offering free shipping on all orders and is sold in locations in Hawaii and across the mainland United States.

Hawaiian Choice's broad spectrum (zero THC) CBD oil tinctures, topicals and edibles can be found in more than 150 locations from New York to Tokyo including at luxury hotel spas, including the Four Seasons Maui and Grand Hyatt Kauai.

Stores interested in stocking either brand can find wholesale application forms on both web sites.

Hawaiian Hemp FarmRare Cannabinoid Company and Hawaiian Choice both use CBD extracted from hemp grown on this organic farm on the Hawaiian island of Kauai.